For other uses, see Perseus.

End of the Line
Break on Through
Ashes to Ashes

"Today we reshape the world. Our motherland is lead by cowards and weaklings. In time, the Americans and their NATO puppets will bring the Soviet Union to its knees. We will break the stalemate, then burn them both to the ground. They sleep soundly at night, knowing they put on a good parade - but they lack the will to do what must be done. The superpowers will fall, victims of their own greed and corruption. We will rebuild Greater Russia from the ashes."
— Perseus in the Multiplayer introduction.

"Perseus" is the codename of the main antagonist of Call of Duty: Black Ops Cold War. He was a rogue, mysterious and charismatic Soviet intelligence officer and spymaster who led an international ring of undercover spies, all similarly using the cover name Perseus as a secret front for their collective activities. The spy ring has connections with an international network of criminal organizations and terrorist groups across the globe, with the ultimate goal of destroying the West's influence in global affairs, setting the Soviet Union up as the dominant superpower.

During the Cold War, the man who would come to be known as Perseus was a radical military intelligence officer within the Soviet Union. Believing the Soviet leaders to be too weak and that the state itself would soon be at risk of being overwhelmed and "consumed" by Western corrupt imperialist and subversive influence, he took leadership of an extremist and rogue international spy ring all operating under the code name of “Perseus" with the goal of undermining western power and setting the Soviet Union as the leader of all the world's nations.

In January 1981, Perseus was able to acquire a nuke that was part of Operation Greenlight. In a meeting with his right-hand operatives “Bell”, Arash Kadivar, Vadim Rudnik, and Robert Aldrich, he explained his plan to detonate all of the Greenlight nukes from the safety of Solovetsky in order to pave the way to the next part of his plan. Unfortunately Bell was later shot and left for dead by Kadivar, who was then in turn killed by an American strike team led by Russell Adler.

He had the nuke transported to an abandoned facility in Cuba where he had one of Nikita Dragovich’s former agents, Theodore Hastings, reverse-engineer the detonation codes which would enable Perseus to activate the remaining nukes in Europe. Having obtained what he needed, he shot Hastings and two of his colleagues before successfully fleeing in a helicopter, though not before the CIA briefly interrogated Hastings about Perseus’ true intentions. Bell is then interrogated by Adler, then one of two outcomes may occur based on the players actions.

If Bell decides to betray the USSR, side with Adler and tell them that Perseus is located in Solovetsky, the CIA will launch a final assault to stop the detonation of the nukes, they will successfully stop Perseus’ plan, but Perseus will successfully evade capture.

If Bell decides to remain loyal to the USSR, betray Adler and lie about Perseus’ position, they will set up an ambush in Duga. Perseus will personally assist Bell in the execution of all of Bell's former squad mates, including Adler. As a reward, Perseus lets Bell personally order the detonation of all the Greenlight nukes. From there, he mocks Adler for thinking that he could’ve accomplished this on his own before leaving with Bell to execute the next stage of his plan. Perseus then uses his agents within all the governments in Europe in order to push them to top leadership and create governments sympathetic to communist politics and align with the USSR, whilst bringing the USSR more in line with Perseus' view of communism.

In August of 1984, Adler confronted Vikhor "Stitch" Kuzmin on the whereabouts of Perseus. Kuzmin confirmed to him that Perseus was dead, his life taken by cancer a year earlier. The final confrontation between the two occured on his grave, buried in an unmarked location in Verdansk.

In Call of Duty: Warzone, Perseus is mentioned in a letter from Imran Zakhaev as a mentor, having played a part in radicalizing his attitude towards the West. 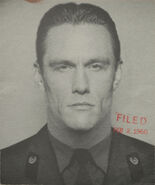 CIA Photo of the young Perceus.

Perseus discussing his motives to the Perseus spy network. 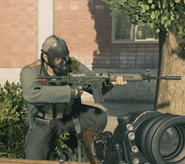 Perseus with a Krig 6 in Ashes to Ashes 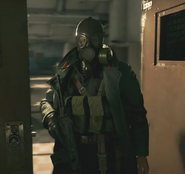 Perseus reuniting with Bell as he prepares to give the detonation order.

Perseus talking about their homeland

Vikhor "Stitch" Kuzmin in front of Perseus' grave at Verdansk.
Community content is available under CC-BY-SA unless otherwise noted.
Advertisement