"Persona Non Grata" is the fourth mission of Call of Duty: Modern Warfare 3. The player assumes the role of Yuri. This level is set right after "Endgame". The main objective is to evacuate the wounded Soap to Nikolai's chopper. At first they shoot their way towards a weapon cache where Yuri will be operating a UGV (Unmanned Ground Vehicle) which will be used to clear a path to the helicopter where Yuri is left behind, but eventually gets to the chopper after nearly drowning in a river.

The mission starts with Soap still wounded from the events of Endgame, while Nikolai and a doctor attempt to aid him. During this, Makarov, who is "tying up loose ends", sends his men to attack. Yuri is sent to assist Captain Price, the Russian Loyalists, and other Task Force members in protecting Soap from the Ultranationalists. During the gunfight, the doctor who was aiding Soap is killed, and Yuri rushes to the table next to Soap and gives him a sedative. After injecting Soap, an Ultranationalist soldier breaches the room, but Price disarms him and shoots him in the head. Later on, Soap, needing to be moved, is carried by Nikolai as he follows Price and Yuri. They clear their way out of the building, fighting hostiles until they reach the ground floor. The pair, along with the Loyalists, clear the courtyard of enemies.

Nikolai mentions a weapons cache nearby which contains a UGV (Unmanned Ground Vehicle), which they can use to reach a chopper. Yuri and Price exit the courtyard and head onto a nearby street. Price and Yuri fight alongside the Loyalists as they clear the streets, while some stay to assist wounded civilians. At the end of the street, the two take a sharp left, and come under heavy fire from enemy forces. To reach the UGV, they go through a building on their right.

When the group reaches the weapons cache, Nikolai tells Price the UGV is in a shipping crate under the cache. Price opens the crate which reveals the UGV. Since the device is Russian, Yuri operates the machine and clears the way of enemies with the machine's mounted grenade launcher and minigun for the group to reach the escape helicopter safely. After fighting through several enemy emplacements and having commandeered the helicopter, the UGV is destroyed by an enemy Reaper.

Yuri exits the controls and sprints to the helicopter, while avoiding Predator Missiles being fired by the Reaper. When Yuri is close to reaching the chopper, the Reaper's fire collapses the structure under Yuri, sending him sliding down a hill, avoiding debris sent hurtling to him by more enemy fire, and sent falling into a river. At first, the streams make it difficult for him to escape, but he finally grabs hold of a rock near shore and crawls onto land as his friends find him and bring him to safety. 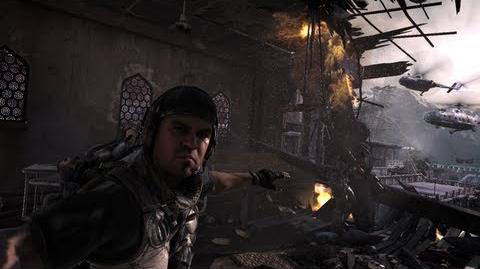 8. Start the mission by exiting a building and entering a courtyard. Once in the courtyard, head to the right and look for a small room that houses this piece of intel.

9. In the market area, look for a house on the right side of the street sitting on a corner. Head to the second floor and find the intel poised atop a nightstand in a bedroom.

10. Behind Price, in a shed, where Yuri takes control of the UGV. The intel is sitting on top of a barrel on the back side of the crate with the UGV in it.

11. Outside of the shed where Intel #10 sits a playground, and the intel location is on top of the slide. Wait until the UGV is destroyed and the 'sprint to the evac zone' commences before the player can grab it. 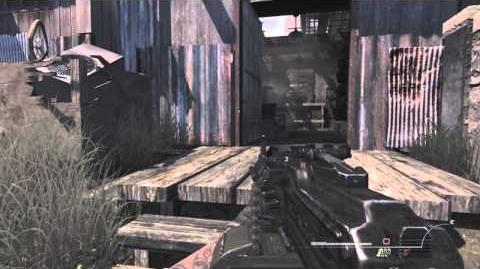 "Do whatever this man says!"
— Nikolai to Yuri about Price

Soap after killing Shepherd in Call of Duty: Modern Warfare 2.

A look at Yuri. Notice how he has the same character model as Kamarov.

Yuri falls into the water after the MQ-1 shoots down his way of escape.

At the ending Yuri crawling after falling off the waterfalls.

Wounded Soap in the Littlebird.