In Shaolin Shuffle, recover one piece of the Soul Key.

Pest Control is an achievement featured in the Call of Duty: Infinite Warfare zombies map Shaolin Shuffle. It requires the player to recover the one piece of the Soul Key found in the map whilst also clearing the current infestation of rats. It is also the map's main easter egg achievement.

With the key, open the locker with the weird symbols on it in the second subway station. Once the locker is open, return to the Black Cat Dojo area. On a wall outside of the map are two giant Chinese symbols on the wall of a brick building. The player must only shoot the symbol on the left once. Once the player shoots the symbol, a small gong sound can be heard. After the first symbol, the player must shoot the second symbol of the four located in the bathroom of the Inferno Club, which will make a small gong sound as well. After that, the player must shoot the first two symbols on the wall by the Volk, which will sound a large gong, signifying the step's completion.

Around the map are small orange dragon symbols that spawn one at a time in various locations. The player must use the Rat King's eye in a similar fashion to the Vision Pulse to find the symbols. The locations for the symbols are as followed.

If the player attempts to pick up the wrong poster, the player will have to collect the symbols again before repeating the Morse Code step.

The locations of the symbols are as follows:

Another Rat King symbol will spawn on the rooftop by the RPR Evo. Like before, interacting with the symbol will spawn the Rat King. Like the first battle, the player must shoot the Rat King until he drops a brain. Pick up the brain and bring it to Pam Grier, which will cause a black sideways oval to blink four times below the "scene" indicator.

In three rounds after talking to Pam Grier, the screen will cut out as the "film" burns, with a message from Infinity Ward appearing on the screen. After it disappears, the player will be spawned in front of the Black Cat Dojo with several zombies and every exit blocked off with fire. The player must kill all of the zombies before they can leave the area. Once all of the zombies are dead, a piece of a turnstile will appear in the area. Pick up the part and insert it into the turnstile in the first subway that is missing said part. Doing this for the first time will reward the player with the Message Received achievement.

The locations for the rings are:

The third and final Rat King symbol will spawn on the streets by the Pink Cat. Like before, the player must interact with the symbol, which will summon the Rat King. The player must shoot him enough times until he drops a heart, which can be used as a lethal grenade.

Once the player collects the heart, they must talk to Pam Grier. After talking to her, enter the Rat King's lair in the sewers, which will start the boss battle. The fight is divided into four sections. The first section is shooting the Rat King until he retreats. A gong will sound to signify his retreat. After he retreats, the heart, brain and eyeball from the earlier steps will spawn on the ground. Each item represents a different stage, which the player can pick in any order.

If the player takes too long to clear the acid, more acid will spawn in.

Picking up the eyeball and placing it down in the center of the arena will cause it to send a vision pulse, revealing several symbols all around the arena. The player must either use their own eyeball obtained from earlier or the eyeball in the center to locate the symbols and shoot them. Once all of the symbols have been shot, a Max Ammo will spawn in the middle.

If the player takes too long to shoot the symbols, the Rat King will spawn in several more.

In between each stage, the player will have to face the Rat King. Each time the player battles him, he will gain more health and more abilities. Once all three stages have been completed, the player must shoot the Rat King until he is killed. After he is killed, the ending cutscene will play. Afterwards, the Soul Key will spawn where the Rat King died. Picking it up will reward the player with the Pest Control achievement. The Soul Brother achievement will be rewarded to the player as well if they have opened Pack-a-Punch and completed the easter egg.

After the match has ended, the player will now be able to insert the cheat code to play as Pam Grier. Completing the easter egg again as her will award the player with the Exterminator achievement.

All of the symbols with each letter translation. 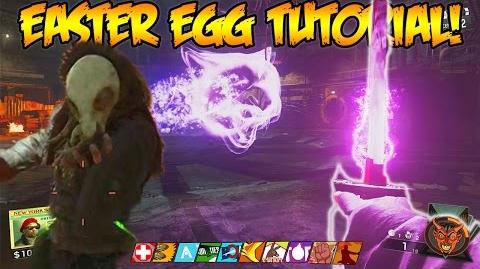