"This is Peter McCain. It worked. I'm in the Orb now -- I don't know how to explain how it feels, but it sure beats that A.D.A.M. Unit by a country mile. It's been a long, strange journey -- living, fighting, dying... finding out that death's not the end. Thanks to you, my journey continued. I have some unfinished business to attend to, but I'll never forget what you did for me."
— Peter McCain after being transferred in the Elemental Orb.

Peter McCain was an OSS spy sent to infiltrate Group 935 as a research assistant based out of Munich[1]. He started working at the Der Riese facility on June 17th, 1945 and was then transferred to the Asylum facility in Berlin two months later.

Suspecting Group 935 was losing control over their experiments, Peter's handler at the OSS, Cornelius Pernell, sent a Marine Recon Team composed of "Smokey", John "Banana", Paxton "Gunner" Ridge; and led by "Tank" Dempsey, to the asylum. Peter was outed as a spy the next day and captured by Group 935. On September 3rd, 1945, an outbreak occurred at the asylum and Peter managed to escape but lost his left forearm. The recon team arrived three days later and found out the facility was overrun by zombies. "Smokey" and "Banana" were killed during the fight and Dempsey was captured and sent to Doctor Edward Richtofen. Only Paxton managed to survive and escape the facility.

When Primis (Edward Richtofen, "Tank" Dempsey, Nikolai Belinski, Takeo Masaki from Dimension 63) arrived at the Der Riese facility and Richtofen killed his Ultimis self, moments after he teleported away Ludvig Maxis and his daughter Samantha, it triggered fractures across space and time.

In the Proditione fracture, the Rising Sun facility was overrun in 1942 and Division 9 began the construction of the Island facility on the Pohnpei island.

On September 13th, 1945, Cornelia, the female counterpart of Cornelius, attempted to send a transmission to Peter to rendezvous at the abandoned Rising Sun facility. He died shortly after jumping over the facility when a portal opened by Primis appeared below him.

When Primis opened a portal to reach the Agonia fracture, Peter's corpse went through the portal. The portal opened in the sky over Stalingard and Primis used Peter's parachute to land safely in the city.

Almost 20 years later, at the request of Cornelius, Paxton Ridge recovered Peter's remains and delivered them to Camp Edward, Nevada. On June 1st, 1964, Cornelius Pernell and Doctor Hale resurrected Peter McCain using the Elemental Shard. Peter McCain started having dreams of giant monsters and medieval France, but the visions slowly disappeared over the next weeks.

Peter started working at Broken Arrow and was appointed Deputy Director by Pernell. In 1968, McCain filed a report to the Departement of Defense against his old friend after witnessing unauthorized experiments performed by Pernell and Hale using the American Pyramid Device. Peter was, however, arrested by Pernell and put in solitary. On March 15th, 1968, George Sawyer and his men arrived at Camp Edward to arrest Cornelius Pernell causing the entire facility to shut down and Pernell to become Avogadro. During the incident, the life force of Peter became trapped inside a broken A.D.A.M. unit. Once Avogadro was contained, the facility was abandoned.

After Primis freed their Ultimis selves from Groom Lake in 1963, they all traveled to Camp Edward in 2025 as part of Nikolai's plan to retrieve the first half of the Elemental Shard.

At the facility, Rushmore asked them to find and repair the A.D.A.M. unit where the life force of Peter was trapped in as Peter was "someone very important to humanity's future" according to the AI. Rushmore then asked the crews to retrieve an Elemental Orb created to contain and safely transport a human life force. After his life force was transferred inside the orb, Peter thanked them and Rushmore for saving him, and he flew away stating he had unfinished business to attend to.

Before his death at the hands of Nikolai, Ultimis Tank Dempsey recalled Peter McCain and honored him during Primis & Ultimis' victory celebration.

Peter's corpse on Shi No Numa.

A close-up of Peter's corpse.

Peter's parachute as seen in the opening cutscene of Gorod Krovi. 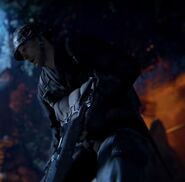 Peter as seen in Revelations, wielding an MX Garand.