Call of Duty Wiki
Register
Don't have an account?
Sign In
Advertisement
in: Call of Duty: Modern Warfare 2 Locations

"Long history of this building. Not much of it pretty. Started out as a castle with an actual dungeon. Built to withstand any siege. Building survived every brutal winter. The occupants... they weren't so lucky. The Monastery, didn't survive the purges. Over the last century it's played host to anyone the government didn't want, but couldn't kill. Place is filled with living casualties of the last war... which I swear I thought we'd won."
— Captain MacTavish

The Petropavlovsk Gulag is an Ultranationalist stronghold that is later attacked and destroyed in a joint effort by the United States Navy, U.S. Navy SEALs, and Task Force 141 in the mission "The Gulag", and part of the level is featured in the Spec Ops mission, "Breach & Clear".

The Petropavlovsk Gulag is mentioned in Call of Duty: Black Ops Cold War as the prison where Vikhor "Stitch" Kuzmin and Maxim Antonov were sentenced to.

The prison was at first an actual castle built with a panopticon style dungeon that was later turned into a monastery and made to survive every siege, brutal winter, and the purges. However, about a century later the castle became a prison for "anyone the government didn't want, but couldn't kill."

In 2016, the combined forces of the US Navy, Navy SEALs, and Task Force 141, attacked the Gulag to rescue a prisoner to be used as bait to lure out Vladimir Makarov, but were met with heavy resistance from the guards via small arms fire and missile emplacements. Upon AH-6 Little Birds deploying them in the prison courtyard, the Task Force fight their way through the prison looking for Prisoner 627, eventually finding him in the far end of the Gulag along with a guard in his cell, who 627 quickly killed, and then incapacitated Roach with the guard's rifle. Upon being ordered to "drop it", prisoner 627 quickly realized it was in fact his old SAS squad mate Soap, who in turn found out that prisoner 627 was John Price. With the Navy starting the bombardment, TF141, along with Price, quickly had to find a way to escape while outrunning falling rubble. Eventually, the squad is trapped in a dead end. However, Soap quickly launches a flare through a hole in the ceiling giving the extraction helicopter the location to drop a SPIE rig. The squad quickly leave the prison just in time to see the Navy destroy it.

The Gulag in the distance.

Overhead view of the Gulag

Task Force 141 being deployed in the courtyard.

Task Force 141 beginning the assault on the Gulag. 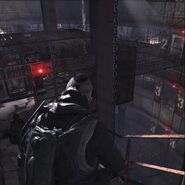 The guards defending the gulag.

Firefight in the shower room. Note how the guards are dressed in urban camo rather than winter.

A cell in the prison.

A small office area in the prison. 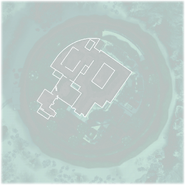 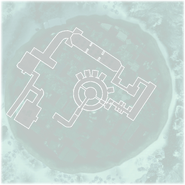 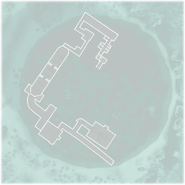