The vehicle is first seen at the end of "Ste. Mere-Eglise-Day". The player has to get into it to complete the mission. It's prominently featured in "Normandy Route N13" as Martin's squad tries to find headquarters. After Moody rams into an enemy Kubelwagen, the Peugeot 202 is too damaged to continue on with, so it is abandoned and replaced with a hotwired Kubelwagen for the rest of the mission.

The vehicle is first seen in"D-Day" and later appear in "S.O.E.", "Liberation", "Collateral Damage", and "The Rhine". They appear as either the two door or the four door model. In Liberation, Vivian is seen driving it to the german headquaters in the beginning of the mission. 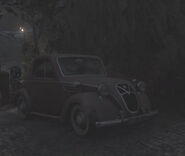 Retrieved from "https://callofduty.fandom.com/wiki/Peugeot_202?oldid=2430799"
Community content is available under CC-BY-SA unless otherwise noted.