For the successor, see PhD Slider.

PhD Flopper is a Perk-a-Cola featured in Zombies. It was introduced along with Stamin-Up in the map Ascension and returns in Call of the Dead, Shangri-La, Moon, Cell Block and Origins. PhD Flopper also makes an appearance in part as a Persistent Upgrade on Buried as well as an unobtainable Easter Egg on the maps Die Rise, Mob of the Dead, and Blood of the Dead. PhD Flopper has been replaced by Widow's Wine in the remastered version of Ascension, Shangri-La, Moon and Origins, due to the absence of diving to prone in Black Ops III.

The Perk-a-Cola costs 2000 points and features a dark blue and purple color scheme, though primarily purple. Its icon displays a radiation trefoil emitting shock waves. PhD Flopper completely negates self-inflicted damage; however, the player will still groan and suffer temporary movement reduction when falling down from an elevated area. Another feature of this perk is that when players dive to prone from a height from which they would normally take damage, a 7.5 meter radius explosion is created upon landing.

The explosion is very powerful, with a maximum of 5000 damage at the center of the blast, and can kill zombies with one hit up to approximately round 20. Between rounds 20 to 30, PhD Flopper will begin to make crawlers, and on rounds beyond 30, zombies will retain their legs even in the center of the blast. The perk is made from prunes and some types of chemicals. However, as this is an explosive "weapon", it should be noted that the player only receives 50 points per kill, when opposed to the 60 points that are acquired by using a bullet firing weapon, so using a gun would be advised if the player is going to buy something, such as other Perk-a-Colas. This perk does not seem to work when diving right on top of multiple zombies. It should also be noted when "flopping" that landing on a prone player while diving to prone will cause both players to be downed instantly, so one should avoid other teammates while diving.

The PhD Flopper machine is very thin, similar to that of Widow's Wine, and is covered in blood. It has a yellow paint job (which later changes to purple) on the front of the machine. There are four levers, from up to down, coloured red, green, white and purple. Under them, a bottle dispenser with a coffee cup in it can be seen. Under that, the words "Flopper PhD" can also be seen. On the top of the machine, the PhD Flopper shield can be seen, with several rods with yellow spheres stick out of it.

PhD Flopper appears in Cyborg Rising mode of Call of Duty Online, translated as Armor Cola. It is exclusive to the character Sergeant, and is awarded to the player after surviving three rounds.

The PhD Flopper machine in Ascension.

Its logo on top of the vending machine. 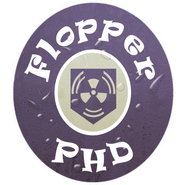 PhD Flopper in Mob of the Dead