"Dig site in Egypt. Flank your enemies through the tombs of ancient Pharaohs."
— Description

Pharaoh is a map in Call of Duty: Ghosts. It is one of the four new maps to be featured in the Invasion DLC. It takes place in an abandoned archaeological digging site withing an ancient Egyptian palace. The map is large in size but mostly contains close to medium range engagements. It features dynamic map interactives and secrets based on Egyptian mythology.

"Pharaoh is the abandoned archeological site of an ancient Egyptian palace. Players will have to be on the lookout for collapsing monuments and urns full of flesh-eating scarabs, among other surprises in this multi-level map. Inside the palace, players will battle through multiple chambers ideal for close-quarters combat and short-range weapons, all under the watchful eye of Anubis, the half-jackal/half-human, protector of the dead, who will handsomely reward players who unlock this map’s Field Order - the Anubis Blessing."
— Official Description

The majority of combat occurs outside, there are some accessible buildings that serve as alternative routes but mostly the firefights happen outdoors. Some buildings have a sarcophagus inside that ca be utilize to duck from enemy gun fire. The Main building structure is the temple located at the upper portion of the map. Most of the environmental placements are monuments, pillars, rock formations and archaeological equipment serving as alternative routes. It basically acts as a maze which if one doesn't familiarize him/herself, they won't easily navigate through the map leading them to dead ends. It also provides tight corridors and spaces which makes it perfect for weapons such as Submachine Guns. It is divided into two sections: the archaeological site and the temple itself.

This portion contains a lot of rocky formations and pillars of which acts as a maze and ledges that give higher ground vantage points. Some larger monuments such as the fallen Egyptian head right above the burial room separates pathways giving different routes of which players can venture through. The most common places players will be is the left section of the site, specifically the burial room chamber and destroyed pillars. The right section namely the courtyard and oasis have open areas and seems to be lower ground due to the stairs it has that leads to higher ground.

The whole upper portion of the map is the abandoned Egyptian temple. Connecting the courtyard from the lower ground is the Queen's chamber which has only one use for it other than being an alternative route. A Burial tomb room leads to a digging site with a pillar which can be collapsed if an explosive is used upon it, it is very useful for objective based gamemodes. The palace which is the largest accessible building is divided into two areas: The Shrine and The Burial Chamber. Outside, a long hallway connects it to the mummification room and the entrance pathway.

In Domination, both A and B Flag are located outside while the C Flag is inside.

This one is very tricky to see, let alone find; in the northeast tomb room, look out beyond the map boundaries and a little to the right, the Egg is a little obstructed from the smoke coming from the fires inside the room. It is best seen while using a sniper rifle.

A view of the Pharaoh map 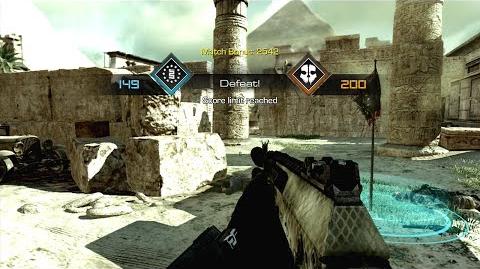 Call of Duty Ghosts Domination on Pharoh (No Commentary)
Gameplay in Domination.