"Displaces you into another dimension, avoiding damage. Other phased players can engage you."
— In-game description.

Phase Shift is a payload for FTL in Call of Duty: Infinite Warfare. It is unlocked at level 40. Phase Shift allows players to enter an alternate dimension where they cannot be damaged or do damage to any player in the normal dimension, as an escape mechanism. Only players who are within a Phase Shift can damage and kill each other.

The Phase Shift cooldown was originally 60 seconds, however this was increased to 90 seconds on the February 3rd, 2017 update[1]. 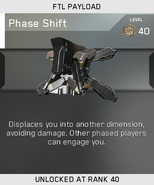 Phase Shift being unlocked in Multiplayer.
Add a photo to this gallery

Retrieved from "https://callofduty.fandom.com/wiki/Phase_Shift?oldid=2413370"
Community content is available under CC-BY-SA unless otherwise noted.