"This seaside Italian getaway is anything but idyllic, as tight corners and branching pathways pose great risk at every turn. Close-range combat dominates, and the team that best utilizes flanking routes will most often come out on top. Attacks from behind, above and below are an ever-constant threat. Keep up your awareness and don't get taken by surprise."
— Call of Duty ELITE

Piazza is a multiplayer map for Call of Duty: Modern Warfare 3 set in Italy.

In Survival Mode, although Piazza does not have a difficulty level in-game, it plays as if it had the difficulty of Regular. The player(s) start with the USP .45, two Frag Grenades, two Flash Grenades, a Self Revive and 250 Armor. The hostiles include Bomb Squads, Chemical Warfare, Choppers, and Riot Shield Juggernauts. 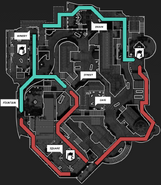 An overview of the map. Note that this is an incorrect map of Domination on Piazza, as B and A should be swapped around.

Teddy Bear inside the bell. 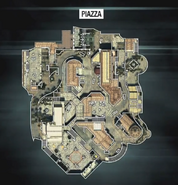