For the similar system in past games, see Create-A-Class.

For the similar system in Ghosts, see Create-A-Soldier. 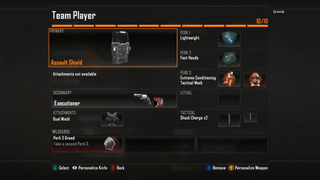 As its name implies, the Pick Ten system gives the player the ability to choose ten elements to make up their loadout. In custom games, the amount can be customized from 3 points to 17. Each element costs one Allocation Point, which can be anything from a primary weapon, secondary weapon, weapon attachments, grenades, gadgets, and perks.

Using this system, the player can choose to have more emphasis on particular elements, like spending points on more attachments and foregoing grenades entirely if the player does not use grenades.

Camouflages, clan tags and emblems attached to weapons do not take up an Allocation Point.

Aside from the ten points given for building a class, the player is also given three Wildcards, which allow further tinkering of the elements the player has previously selected, although the Wildcards cannot count towards the elements themselves (no more than ten allocation points). A Wildcard itself takes one Allocation Point.

Normally, a primary weapon can only have two attachments, but by using the Primary Gunfighter wildcard it can add another, the secondary gunfighter allows two attachments on a secondary weapon. The same can be done for things like carrying another lethal grenade, installing another perk, or holding a second primary. 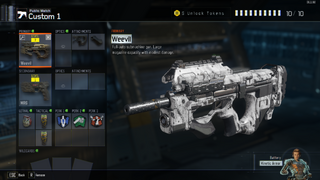 The Pick Ten system returns in Call of Duty: Black Ops III. Compared to the previous version of the system, Pick Ten only includes weapons, perks and equipment; the Specialists feature and scorestreaks are chosen in the beginning of the match and do not count in the ten slots.

The Pick Ten system returns in Call of Duty: Infinite Warfare. Compared to the Create-a-Soldier Perk Points system in Call of Duty: Ghosts, Infinity Ward stated that using the Pick Ten system would help the game be more competitive and balanced. Like in Black Ops III, Pick Ten only includes weapons, perks and equipment; the Combat Rigs feature and scorestreaks are chosen in the beginning of the match and do not count in the ten slots. Decorations like camouflages and charms don't take up any point of a class.

Also, optics are given their own slot in the weapon customization section. This allows for 3 attachments in total or 6 with the Primary Expert Loadout Option.

Loadout Options are identical to Wildcards, but simpler. Aside from the ten points given for building a class, players are also given the ability to use Loadout Options, which allow further tinkering of the elements the player has previously selected.

Normally, a primary weapon can only have 3 attachments (one of them is an optic), but by using the Primary Expert Loadout Option it can add another, Secondary Expert allows players equip one more attachment on their secondary weapon. The same can be done for things like carrying another lethal grenade, installing another perk, or holding a second primary.

Unlike in previous games, carrying a second tactical equipment is thought as using a Loadout Option.

The Pick Ten system returns in Black Ops 4, it is based on the Black Ops III version and is heavily modified with many new features.

A new type of weapons in Black Ops games, tactical rifles are basically the marksman rifles from Ghosts. Some of these rifles are not equipped with a custom scope by default.

In Black Ops 4, handguns and shotguns (shotguns are sidearms in this game) can be equipped with up to 6 attachments, identical to primary weapons.

For balancing purposes, not all weapons in a certain weapon class have the same attachments. For example, an assault rifle with high damage may not be able to have the Rapid Fire or Long Barrel while others can, because that weapon can be too powerful if it has these attachments.

Many attachments have enhanced versions, they are named "II (two)" while the normal version are called "I (one)". The "II" attachments are only available after the normal versions are equipped, attaching them together will greatly increase the weapon's performance, although this needs 2 points.

Rocket launchers and the Ballistic Knife now have their own attachments.

Operator Mods are special attachments that require a wildcard to be equipped, an operator mod modifies a weapon's behavior in a fundamental way, to a greater degree than regular attachments. But there is a disadvantage: players have to spend 3 points to equip them, 1 for the wildcard and 2 for the Mod.

It should be noticed that not every weapon has its Operator Mod.

Gears can be considered as the 4th perk of a class, they cost 1 point, and each class can only have 1 gear.

Lethal and tactical equipments are put together now, players can only choose one of them. They cost 1 point, and each class can only have 1 equipment.

Choosing special issue equipments when creating a class is recommended.