Ping appears as an Elite perk in Call of Duty: Ghosts and as a trait exclusive to Warfighter in Call of Duty: Infinite Warfare. Ping alerts enemy players on the minimap that are near another enemy killed by a player equipping this perk or trait.

Ping is an Elite perk in Call of Duty: Ghosts. When a player kills an enemy, the perk will "ping" a radar circle on the minimap (the size of 700 units, or 7 meters) where the enemy fell, which will notify the player if there are any enemies in the vicinity. It is useful when there are scenarios where there will be two or more enemies, or a large group of enemies near the player's kill. Players using Off the Grid won't show up on the map, but a sound effect occurs when an enemy is in the circle, regardless of exactly where they are. These effects are personal, and act like a Level 1 SATCOM, in which an empty dot would show up.

"Kills and assists active a minimap ping at the enemy's location."
— In-game description.

Ping reappears as a trait for Warfighter in Call of Duty: Infinite Warfare, unlocked by default. It operates similarly to its predecessor, however with the added bonus of also displaying a ping when the player earns an assist as well as a kill.

Players that are running the Ghost perk will not be detected by an enemy ping. 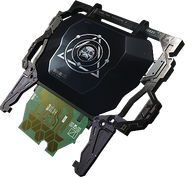