"Floating resort in the middle of the Indian Ocean. Tight corners and angles throughout."
— Map description

Plaza is a multiplayer map in Call of Duty: Black Ops II. The map takes place in a large shopping mall, featuring numerous stores and bars across Colossus.

Plaza, similar to Express, is a nearly symmetrical map. The center area of the map can be overlooked by two balconies on each team's spawn. These places are common for snipers due to the view they provide, and tactical insertions are frequently used. These balconies have two entrances each, and without certain protection such as a Shock Charge or Bouncing Betty, can lead to the enemy quickly flanking players. The sides of the map are excellent for submachine gun and shotgun encounters, as they are rather tightly enclosed spaces. Assault rifles can prevail in the center area of the map, with proper cover.

The primary firefights usually occur in the middle section of the map where there is a intersection. Weapons with high rate of fire and shotguns prevail in this area. In Domination, intense fights revolve around the B Flag which is dead centre in the middle of the intersection.

Interior of the Luna nightclub.

Exterior of the Luna nightclub.

The VTOL Warship set upon an inaccessible helipad near the Mercs' spawn.

Brochures for the Oasis resort. 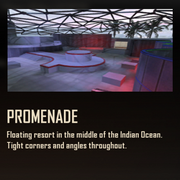 An aerial view of Plaza.
Add a photo to this gallery 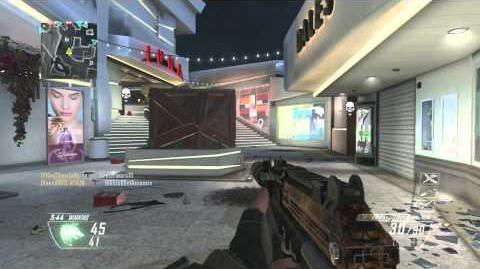 Retrieved from "https://callofduty.fandom.com/wiki/Plaza?oldid=2516639"
Community content is available under CC-BY-SA unless otherwise noted.