Systems Administrator (The Beast From Beyond)

"Our favorite ‘80s nerd is back, but this time, he’s the life of the party. He came to rave the night away, but now he’ll have to fight to survive any way he can. With his intimate knowledge of Willard Wyler’s work, the team continues to lean on Poindexter for any insight he can provide."
— Official Rave in the Redwoods Biography

Poindexter S. Zittermann is a playable character featured in Call of Duty: Infinite Warfare Zombies. He is voiced by Seth Green.

Poindexter grew up under the care of his father, a particle physicist, and a mother who is a drunkard. In his childhood, he was obsessed with "comic books, video games, Saturday morning cartoons, and every film that Willard Wyler had ever released". In his senior high school year, Poindexter was forced to register in the Drama class for graduation; this would however lead to him being cast in a class play in a role that would catapult him to success.

Poindexter eventually became successful as he moved to New York City in pursuit of an acting career, eventually becoming a "staple on Broadway". Upon hearing about an opportunity to be part of Wyler's next film, he immediately agreed and joined three other actors: Andre Wright, Sally Simpson and Aaron "A.J." Jordaniels to meet up at Wyler's theater.

Outside of the films, Poindexter has light brown hair that slightly hangs over his face, and black rimmed glasses. He wears a blue and grey jacket with a hood, and khaki pants. In Zombies in Spaceland, his hair is slightly darker, although it is obscured due to the fact that he is wearing an orange helmet and larger glasses. He is wearing a green shirt, orange suspenders, and black trousers. In Rave in the Redwoods, he is no longer wearing glasses, and his hair is now dyed light blue, and he is wearing a red visor cap. He is wearing a necklace and various bracelets made of beads. He is wearing pink pants and a blue shirt. In Shaolin Shuffle, the little hair he has is bleached and styled as a mohawk. He wears a chain on his neck that has a lock on it and is wearing a sleeveless leather biker vest over a long sleeve black shirt which has had its sleeves ripped off, and jeans that are badly worn and have holes. In Attack of the Radioactive Thing, he has light brown hair and glasses once again. He is also wearing a white labcoat,  a white collared button up shirt, and a loose brown tie, as well as brown pants. In The Beast From Beyond, he is wearing a red baseball cap, perhaps as homage to Rave in the Redwoods. He is also wearing a green jumpsuit with grey sleeves. After defeating the first boss, he and the other characters are given Willard's suit. 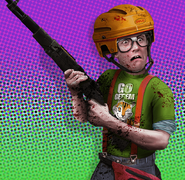 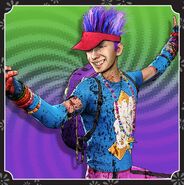 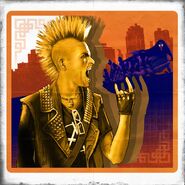 Poindexter with Andre, A.J. and Sally in Zombies in Spaceland

Poindexter's initial concept model. Note the toy pistol with a 9-volt battery attached; this weapon more than likely evolved into the Dischord.

Poindexter concept art for Rave in the Redwoods.

Poindexter as 'The Scientist' in Attack of the Radioactive Thing