Call of Duty Wiki
Register
Don't have an account?
Sign In
Advertisement
in: Call of Duty: Ghosts Extinction Episodes

Destroy the hives, detonate the nuke, and get back to the helicopter.

"First contact with the alien scourge. Head to the heart of the impact and detonate the nuke."
— Mission Description

Point of Contact is the first map in the Extinction mode of Call of Duty: Ghosts. It is set in the post-apocalyptic town of Caldera Peak, Colorado, which has been ravaged by Cryptids and the ODIN Strike that occurred two weeks earlier. There are three main areas of the map, each containing various weapons available for purchase, Challenges, Search Piles and fourteen Hives, including two Barrier Hives.

Point of Contact features the basics of Extinction: there are three main sections of the map where the Hives must be drilled to destroy, players protect the Drill from waves of Cryptids, and the encounters become more difficult as they progress to the final Hive. The first few rounds consist of mainly Scouts; later in the second section Scorpions, Hunters, and Seekers make their debut; and in the third section Rhinos, which sometimes require a large amount of teamwork to defeat. Players can purchase weapons and scavenge search piles for equipment to aid them in their objective. Completing Challenges rewards players skill points to spend to upgrade their classes and abilities. Upon destroying the fourteenth and final Hive, players activate the nuclear countdown and must run all the way back to the first area and exfil on the helicopter, while at the same time evade the hordes of Cryptids that suddenly appear en masse.

When the Federation assaulted the ODIN Space Station, a volley of tungsten rods destroyed a large portion of the American North and Southwest. However, a stray missile impacted the small town of Caldera Peak, Colorado, revealing the prehistoric Cryptid species living in a colony underneath the nearby Colorado colonies. Now once again aboveground, the creatures began the eradication of all life near the crater, forcing the military to send in CIF Team Four two weeks later, a squad of the Rapid Reaction Force. After disappearance within the first hour of deployment, the deployment of a second squad, codenamed Spectre One, to pacify the "alien" outbreak via nuclear explosion is authorized by the President.

There are four Hives with six possible Hive locations (the first Hive must be cleared to access the entire area), as well as one Barrier Hive. There are three mounted minigun turrets (costs $750), two Electric Fence traps and one Fire Trap. After destroying the Barrier Hive, there is always a money pick-up you can get that gives $3000 ($2250 with the Smaller Wallet Relic).

There are three Hives with four possible Hive locations, as well as one Barrier Hive. There are four mounted minigun turrets, four Electric Fence traps and two Fire Traps. There is also a laptop which can be paid in six (three in Solo) $1000 increments to call in an Attack Helicopter. This feature is inaccessible during a Barrier Hive attack.

There are five Hives in this area. There are three mounted minigun turrets, five Electric Fence traps and one Fire Trap. One of the Hives opens the basement with another laptop to call in an Attack Helicopter.

Additionally, a Crater area is also present containing the two final Hives and device used in activating the nuke countdown. The Player can find an MTAR-X and MTS-255, an Electric Trap and 2 Minigun Turrets for defending the Drill while it is attack the last Hive. The electric trap is a fallen power line, that is connected to a pool of water in the middle of the Crater.

Here is a list of weapons available in Chaos Mode.

To conclude Point of Contact, there are a total of fourteen Hives that must be destroyed (two of which being Barrier Hives). After destroying the fourteenth and final Hive, the players must arm a nuclear device, giving them a total of four minutes to rendezvous at the starting point of their mission for extraction. During this period of time, massive amounts of Cryptids will begin pursuing them, and the entrances to each area the player went through will be blocked off momentarily by Seeker meteors. Once they have reached the extraction point, the surviving players will board the helicopter as the nuclear device explodes in the distance.

View of the map. 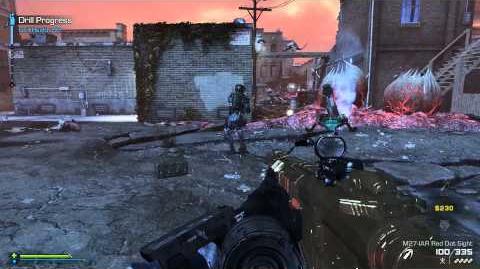 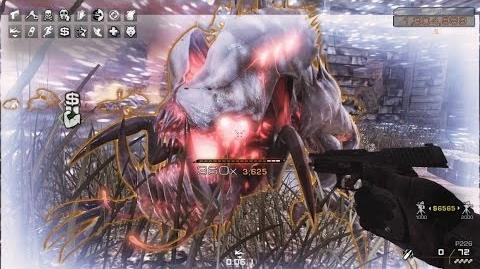