Japanese soldier with a Grenade (player-determined)

"Those fucking animals, they killed him! You're all going to hell, ya hear me? You're going straight to hell!"
— Polonsky, if Roebuck dies

Private (Corporal in Call of Duty: World at War: Final Fronts and promoted if survived) Polonsky was a young United States Marine during World War II. He was assigned to the 1st Marine Division and fought under Sergeant Sullivan's and Sergeant Roebuck's command. His model is shared with "Tank" Dempsey.

Polonsky was a United States Marine under the command of Sgt. Tom Sullivan during the level "Little Resistance" and was under Sgt. Roebuck's command for the rest of the game. As described by Roebuck, he is one of the "new breed" assigned to Sullivan and Roebuck after the Battle Of Cape Gloucester contrary to Miller, Sullivan, and Roebuck who are referred to as the "old breed" by the new recruits, even when none of them are out of their twenties. He is first seen in the LVT-4 amtrac carrying Miller and the squad to Peleliu Island. He and other Marines fight their way through Japanese beach defenses and clear the way for an Allied assault. However, at the end of the mission, Sullivan is stabbed and mortally wounded by a Banzai Charger. Polonsky and the others kill Sullivan's assailant although it is too late. After Roebuck is promoted to Sergeant, the squad is assigned to take the Peleliu airfield. The squad comes across an F4U Corsair that was shot down and attempts to rescue the pilot, only to find that the plane was wired with booby traps, much to Polonsky's disgust. After taking the airfield, they are assaulted by a Japanese convoy and hold out until U.S. fighters provide close air support. He then goes on with the squad to take the rest of Peleliu and later on, Okinawa. After the assault on Wana Ridge, he is seen complaining to Major Gordon about the Marines lack of supplies, while Roebuck and Miller help load wounded marines into a truck, but to no avail.

On the final American level in Call of Duty: World at War, he assaults Shuri Castle with the rest of them. Near the end, a group of Japanese soldiers surrender to the squad, which turns out to be a trick. He is attacked by one, letting his guard down.

If the player does nothing to save Roebuck, he will be killed when his attackers detonate a grenade by his head, killing them as well. Polonsky will curse, and fire his M1 Garand rifle at the rest of the Japanese forces after that. At the end of the battle, Polonsky gives Miller Roebuck's dog tags as Roebuck's voice can be heard doing the narration for the level's conclusion.

If the player chooses to save Sgt. Roebuck's life, then the grenade will kill Polonsky instead of Roebuck. The ending and the battle are the same, except that Roebuck remains as the person shouting orders.

He assists the player throughout the campaign and is also known for his humorous lines and quotes. If at any point during the gameplay the player lets their guard down, he will usually cover them if they are in range, killing the enemy. Also, he could effectively counter Banzai Chargers by either beating them down with the butt of his rifle or knocking them down and shooting them at point blank range. Polonsky is almost always seen wielding his trusty M1 Garand. He seems to be an expert rifleman.

Polonsky hails from New York City as one of his quotes mentions his mother being in Queens. Also, if the player listens closely, he has a slight New York accent. Given his surname, he could possibly be of Polish descent. 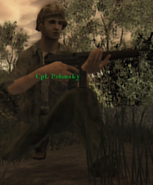 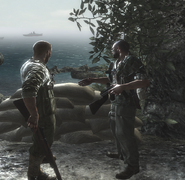