Power Slide is a trait in Call of Duty: Infinite Warfare. It is exclusively available to the FTL combat rig and is unlocked at level 40. Power Slide allows the ability to aim down the sight while sliding, while also increasing sliding distance and decreasing the amount of boost used by a slide. Weapon variants with gun perks that increase performance such as hip fire accuracy or damage can greatly benefit from the increased slide distance of this trait. 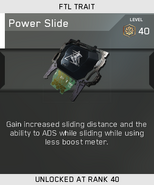 Power Slide being unlocked in multiplayer.
Add a photo to this gallery
Retrieved from "https://callofduty.fandom.com/wiki/Power_Slide?oldid=2417568"
Community content is available under CC-BY-SA unless otherwise noted.