The Power Switch is a utility found in most Zombies maps. It is not seen in Nacht der Untoten, Shi No Numa, Dead Ops Arcade, Nuketown Zombies, Bus Depot, Diner, Farm, Town, Mob of the Dead, Origins, Shadows of Evil, Revelations, Firebase Z and Forsaken. It turns on the power, which in turn is used to use the Pack-a-Punch Machine, Perk-a-Cola machines and other utilities, such as Electro-Shock Defenses. Power switches also appear in Exo Zombies and Call of Duty: Infinite Warfare Zombies mode, labelled as a Generator.

Information in the descriptions refers to other actions using the power switch does other than those stated above.

Der Riese and The Giant

The switch can be found in the courtyard attached to a giant generator. Using it lowers a bridge that connects the second floor of the two sides and also opens two doors, letting players move from the courtyard to this area directly instead of going through whichever side they unlocked. It also lets the players use the teleporters.

The switch is backstage, next to the M16. Using it draws back the curtain, opens the door in the lobby and activates the projector. It also lets Crawler Zombies spawn from then on. It then allows the player(s) to link and use the teleporter.

It is found in the central room in the basement. Using it unlocks the teleporters and the DEFCON Switches. It also lets the Pentagon Thief and the Nova Crawlers spawn.

Located on the top floor of the main building. Using it activates the Lunar Landers and changes the game from black and white to color. It also allows Space Monkeys to spawn.

It is located in the uppermost part of the ship. It lets the players use the Flinger and start the Original Characters Trapped Easter egg. It also allows Pack-A-Punch to begin spawning.

﻿Two power switches are located underground near the Bowie Knife where the water falls from the ceiling to turn the turbines. These power switches activate the water (each switch activating each side) and the power won't turn on until both switches are pulled. Because the switches are associated with water flow, the Water Slide can't be used without them pulled. Turning on the power also lets the player(s) use the Mine Cart.

The power switch is located in the center of the map by the pyramid and Stakeout. In addition to its basic functions, it restores oxygen and gravity to certain areas of the map and allows the Excavators to start breaching the base.

The separate maps do not require a power switch, but Tranzit does. It is located at the Power Plant and needs to be built from three parts: a power board, a lever, and a zombie hand. They can be randomly found:

Turning on the power will set the Avogadro free and it will roam the map from then on as a thunderstorm. The power will turn on green streetlights scattered at or between the bus stops that can be used to make portals from the Denizens. It will also open the exit door to Tombstone Soda, the workbench for the Electric Trap, and the spool-and-wires piece for the Jet Gun. For the first time in Zombies, the power can be turned off after it has been turned on. This option is required to go forward with Maxis' path in the Tower of Babble Easter egg.

It is located on the second floor of the second building in a sewing room. Using it will activate the Elevators which contain the Perk-a-Cola machines and the Pack-a-Punch Machine inside them and can help the players go up and down floors.

It is located on the second floor of the Candy Shop, and it can also be turned on by round 1.

The Power Switch can be found in the Armory next to a bunch of generators.

Turning on the power in Zetsubou No Shima is more complicated than previous maps. Before the player can access the actual power switch, they must first pick up a bucket which is randomly placed in the map, fill it with water from one of the ponds infected with Element 115, and then use it to fill the two water-based power switches. This must be done twice, once for each switch. After this is done, there is a bunker door which the player can open for free by holding the "use" button on it when the prompt to do so shows up. Opening this bunker will reveal several zombies and a Thrasher. The player must kill the zombies (or ignore them) and enter the bunker.

After the player enters the bunker, there will be an area with a regular Power Switch that can be accessed through a door that costs 1500 points; three out of four of the lights above the switch should be green, the other two should be red. This is because the player must clean off webs that are on one of the pipes in the underwater section near said switch. Going up to the Power Switch will bring up a prompt regarding this step. Once the player has cleaned the pipe off, the entrance to the underwater section will close off for a few minutes and the player must fight off hoards of zombies that do not count towards the normal zombies, and do not give the player points. The player must also occasionally get more air by going up to the top at the areas where water does not reach the ceiling, and by shooting the underwater spores, which will give the player more air. After a few minutes, the entrance to this area will reopen, and the player can then proceed to turn on the Power Switch as they normally would in another map.

Going back to simpler power methods, in Gorod Krovi, the power switch is located past the entrance of the Dragon Command Center.

Located behind the cyclotron area, in the same room as the Elemental Pop perk machine.

Located in the underground portion of the map next to Elemental Pop, past the Mule Kick machine. After attempting to turn power on for the first time, the player will break the fuses and must retrieve new ones from Tempests located on the East Berlin Streets and the underground area. After repairing the Power Switch with the new fuses, the player can turn the power on. 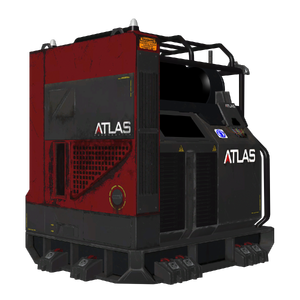 In Call of Duty: Infinite Warfare Zombies, power switches are labelled as Generators and only power certain sections of the map, or in the case of Rave in the Redwoods and Attack of the Radioactive Thing, they power the entire map.

Located underneath the spawn cabin, accessible via the mines. The power switch will open up access to several ziplines, Tuff 'Nuff, Mule Munchies, a boat part and the rest of the top floor of the cabin, as well as an entrance from the mines to the main cabin.

Once the player has turned on all the power switches, they will gain access to the Chi abilities as well as Tuff 'Nuff and the Rat King's lair.

Attack of the Radioactive Thing

To turn on the power, the player must first obtain the power switch handle located on the beach by the OSA wallbuy, being held by a zombie arm. The power switch is located at the respective power station to the right of the spawn location, behind the market. 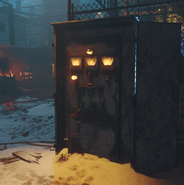 The Power Switch in The Giant 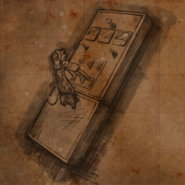 A drawing of a Power Switch as seen in the Zombies Chronicles timeline poster.