Prague is the capital of the Czech Republic and the former Czechoslovakia. It appears in Call of Duty: Modern Warfare 3 and Call of Duty: WWII.

After a successful Russian advance through Eastern Europe, the Czech Republic is occupied by Ultranationalist forces. A large resistance group is active in Prague and its actions escalate into a battle for Prague while assisting Task Force 141 during Eye of the Storm and Blood Brothers.

The Special Ops level "Resistance Movement" reuses Eye of the Storm's map, in which the player must locate rebels and escort them to an extraction point.

The multiplayer map Lockdown is set in Prague. 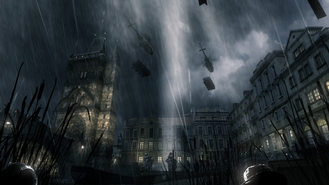 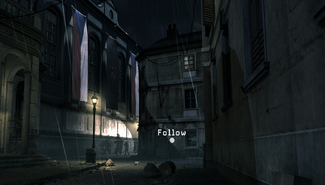 Czech flags hanging next to an Ultranationalist one in Prague. 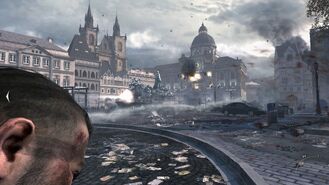 Resistance members in streets of Prague.
Add a photo to this gallery

In the multiplayer of Call of Duty: WWII, the map "Anthropoid" featured in the first DLC pack "The Resistance" is set in Prague, Czechoslovakia.

Add a photo to this gallery
Retrieved from "https://callofduty.fandom.com/wiki/Prague?oldid=2429146"
Community content is available under CC-BY-SA unless otherwise noted.