Captain Price was an English soldier who fought during World War II. He fought in the British 6th Airborne Division and the SAS in Call of Duty and led a group from the 7th Armoured Division during Call of Duty 2.

Chronologically, Captain Price first appeared on October 29, 1942 in the Call of Duty 2 mission The Diversionary Raid. He was leading the 7th Armoured Division, including Sergeant John Davis and Private MacGregor, as part of the Second Battle of El Alamein. Their mission was to destroy an enemy supply depot and acquire any enemy documents. After succeeding the mission, the division is immediately redeployed to defend a small town 30 miles south of El Alamein, sitting on the choke point in the minefields. The 7th Armoured Division got to the town and with the help of artillery fire, the town was defended.

After this, Price and the 7th Armoured Division took part in Operation Supercharge on November 3, 1942 to secure the gaps in the German antitank minefield so that British armour could pass through safely. After successfully charging through the trenches, taking out the many Flak 88 crews along the way, they rallied at the German communications outpost, where news of the success was broadcast back to headquarters.

Following the success of Operation Supercharge, the German forces at the nearby town of El Daba were cut off from any re-enforcements. To take advantage of this, the 7th Armoured Division was deployed to El Daba on November 6 to drive the German forces out of the town and destroy the German cargo ships. It is unknown how large a part Price took in this mission, as he is not seen until the end where he is awaiting Sergeant Davis and Private MacGregor at the docks with cases of wine found from the German supplies.

The campaign catches up to Captain Price and his men much later on in Outnumbered and Outgunned on March 10, 1943. They were stationed ahead of the main force of the 7th Armoured Division at Tourane, Tunisia and awaiting the reinforcements. They quickly find themselves overwhelmed by a German counterattack and are forced to retreat. Price, MacGregor, and Davis commandeer a German Armored Car and attempt to drive out of Tourane. After the armored car hits a mine, they retreat on foot, meeting up with some other men from the 7th Armoured Division, and escape via a stolen German truck. During the retreat some of Price's men were cut off and, despite MacGregor's protests, Price realized that even if they turned back to get the men, they would all be overwhelmed.

Unlike Davis and MacGregor, Price did not participate in the retaking of Toujane the next day.

For Price and the 7th Armoured Division, the final battle of the North African Campaign was the Assault on Matmata, on March 30, 1943. The Division was ambushed before entering Matmata, leaving Price and his men to fight their way in and through the town. Eventually arriving at a German Flakvierling, Price, MacGregor, and several others provide covering fire as Davis takes out German dive bombing planes. After this the team collects all intel and supplies before moving out of Matmata and ending the North African Campaign.

Price was then transferred to the British 6th Airborne Division's D Company. He served at Pegasus Bridge on the 5th and 6 June 1944 with fellow soldier Sergeant Evans. After the gliders that brought them in landed, Price ordered Evans to suppress a bunker before proceeding. Shortly after, a Panzer came in and pinned down the soldiers. He ordered Evans to find Private Mills. Within a few moments, the tank was destroyed and the bridge was secured.

The next morning, after checking the holders for explosives, Price and Lieutenant Davis discussed the scavenged weapons when mortar fire suddenly rained around them and a huge German counterattack came their way. They successfully held the bridge from waves of enemies, until they were relieved by friendlies.

A week after the D-Day landings on June 11, 1944, Allied forces were struggling in the Battle for Caen due to a German Panzer at the city. To break the stalemate, the 7th Armoured Division, including Captain Price, were brought in. Their mission was to probe the Western flank of the German defenses and clear a path to the city. They started off by securing the village of Beltot 18 miles east of Caen and after taking out multiple mortar teams, the team comes across some surrendering Germans with wounded American soldiers. Price orders Davis and MacGregor to get a German truck to evacuate the soldiers, stating that he almost envies "this lot of Yanks. The war is over for these poor bastards."

The next day, after getting the American POWs back to HQ, Price and the 7th Armoured Division were redeployed to Anctoville, 17 miles east of Caen, to secure The Crossroads so that Allied tanks can get moving as soon as possible. The task force secured the town, until German counterattacks left them pinned down in a barn by a German Tiger Tank. Captain Price kept calm despite morale running low, and they were saved when the RAF (Royal Air Force) took out the Tiger.

The 7th Armoured Division kept moving in toward Caen, despite numerous technical difficulties with some of the tanks, and by midday on June 12, 1944, they arrived at St. Louet, 15 miles east of Caen. Once there, they were attacked by a Tiger tank, which took out all of the British tanks. Meanwhile, Captain Price and his men secured key buildings and Flak positions across St. Louet, including the German Field HQ. However, due to the loss of the tanks, the 7th Armoured Division was ordered to pull back to Caumout.

When retreating, on the dawn on June 14 at Amaye sur Seulles, they came under heavy mortar fire. Price and his men eliminated the Mortar team and the German Field HQ, as well as holding it against German counterattacks, including the Tiger Tank. By holding at Amaye sur Seulles they managed to assist the rest of the 7th Armoured Division in retreating to Caumout, meaning their job was done.

Captain Price and Sergeant Evans were transferred to the SAS. At some point, during an unspecified mission, his plane was shot down behind Nazi lines in Austria. Price was captured, and he was taken to a chateau in the Alps. There he met fellow prisoner Major Gerald Ingram, who was soon transferred to Dulag IIIA. He was rescued by Private Martin, Captain Foley, Sergeant Moody and a few other Americans on August 7, 1944.

Later, on September 2, 1944, Price and Evans were sent to the Eder Dam in a special operation to destroy the anti-air defenses and the electrical generators. Sergeant Waters, a member of the SAS, assisted by helping them steal an Opel Blitz truck full of Panzerfausts. Price then makes a getaway from the dam to the airfield. At the airfield, Price defends Evans with a Bren LMG while the latter mounted a Flakvierling stationed at the airfield. The team was then successfully extracted.

Price's final mission on October 27, 1944, was to sabotage the German battleship Tirpitz. He used his knowledge of the German language and forged papers to infiltrate the battleship along with Sgt. Evans. Evans and Price then managed to reach the armory. Unfortunately, after another soldier checked the duo's papers at the armory, Price killed him and blew their cover. While attempting to defend Evans as he planted explosives on the ship's boilers, he was surrounded and killed.

Captain Price in his cell

Captain Price during the Operation Supercharge

Captain Price as he appears in Call of Duty 2

Price in The Crossroads 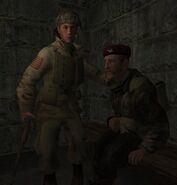 Price killing the armory's guards on the Battleship Tirpitz.
Add a photo to this gallery

Retrieved from "https://callofduty.fandom.com/wiki/Price_(World_War_II)?oldid=1817607"
Community content is available under CC-BY-SA unless otherwise noted.