The Prison Knife, known as the Shiv in Mob of the Dead, is a melee weapon used in the mission "Vorkuta" in Call of Duty: Black Ops and is the default melee weapon in the Zombies map Mob of the Dead in Call of Duty: Black Ops II. It is a piece of metal with black tape around one end. Mason acquires it after killing the guard attacking Reznov with a rock in the opening scene. The player may use the prison knife for as long as they wish, until the "Shoot the lock" objective. After Alex Mason acquires another weapon, the prison knife is no longer equipped. If the player uses melee after this, Mason will use the standard knife when the player presses the "melee" button.

Aesthetically, the Prison Knife undergoes a minor texture adjustment from Black Ops to Mob of the Dead, with the blade seeming less rusted and the hilt less shiny.

The Prison Knife in Black Ops. 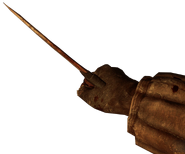 Slashing with the Prison Knife.

Diving with the Prison Knife. 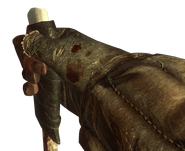 Withdrawing or Equipping the Prison Knife.