Follow Petrenko.
Regroup at the vehicle.
Assault the German Base and find Steiner.
Regroup with Dragovich.
Escape the ship.
Rig the V2 explosives.
Escape the ship before detonation.
Shoot the V2 clamp.

Elements of Call of the Dead

"The men and I had fought through the most bitter of winters on the Eastern Front. We were no strangers to cold. But even now, the blood in my veins chills when I think back to the events of that day...far, far from home..."
— Viktor Reznov

"Project Nova" is the eighth (chronologically the first) campaign mission featured in Call of Duty: Black Ops and mentioned in the outro cutscene of The Fourth Reich mission in Call of Duty: Vanguard. It is a flashback mission that details the events which lead up to Viktor Reznov's incarceration in Vorkuta and the death of a familiar character from Call of Duty: World at War.

The Soviets launched Operation Olympus at the end of the war.

The level starts out with Reznov talking to Mason about his father in their cells in Vorkuta. He explains that his father was a musician during the German occupation who was killed by Nazis who found him and his music to be a symbol of defiance. He furthermore says that collaborating with any Nazi is a "betrayal against all of Mother Russia." He then says that Dragovich and Kravchenko were not hindered by such crimes. He then flashes back to the day he was betrayed.

Reznov looks off a snowy cliff with Dimitri Petrenko and Nevski. The group then trudges down the cliff where they find Dragovich and Kravchenko. Reznov receives his orders to capture Friedrich Steiner alive, and that he will be shot if he disobeys that order. He and his crew move out on a snow truck. After a short time, Petrenko asks Reznov why he doesn't trust Dragovich and Kravchenko, to which Reznov will say that at Stalingrad, Dragovich left him outnumbered and never sent reinforcements. He then tells Dimitri that the two men are opportunists, and are not to be trusted. Reznov takes great care to raise his voice when talking of Dragovich and Kravchenko, as their snow truck is right next to his. Reznov returns to Vorkuta and tells Mason that Petrenko was the bravest man he ever knew, and that his heroic feat at Berlin should have made him a hero, but "Stalin had little need for heroes..."

Reznov flashes back to the mission, where Reznov and his men begin to fight, looking for Steiner. Opposition here is fairly weak, and the player will be armed with a PPSh-41 and a Mosin-Nagant with RGD-33 grenades to deal with them. Russians will burn down buildings to kill all Germans inside. Some Germans will attempt to surrender, but Reznov has no sympathy and tells his soldiers to kill them all anyway. After searching a few buildings for Steiner, the player will be given smoke grenades to mark target for mortars. Here Germans will be standing on bridges with MG42s and Panzerschrecks so it is smart to throw smoke grenades on these structures and to pick up a Scoped Mosin-Nagant to eliminate these soldiers and an STG44 or PPSH-41 for close range. This is the most effective tactic for getting past this area. Eventually, Reznov will fight his way through stiff opposition to Steiner who will insult him and tell him to take him to Dragovich. Describing that despite his defection, Steinner's lack of remorse to the atrocities committed by the Nazis as well as silently maintaining their totalitarian beliefs greatly horrified and disgusted an unsurprised Reznov. He then tells Mason he wanted to kill Steiner then and there due to all of the crimes the Reich has committed during the war, but his belief in orders stopped this.

Reznov skips ahead in his flashback to outside a Nazi ship frozen in the ice, where Kravchenko executes POWs. Steiner talks to Dragovich about how the Germans were sworn to protect the Reich, which included destroying the ship, but Dragovich says to Steiner that there would be no problems. Reznov brings his men into the ship while Dragovich and Steiner discuss the genius of Project Nova and how Washington D.C. and Moscow were to meet a horrible end through Germany's use of V-2 Rockets loaded with Nova 6. However, Berlin had already fallen to the Soviets and the SS failed to destroy the Nova 6. The Russian squad and Steiner then reach the last reserves of the gas within the depths of the ship.

Reznov then says that the victory was short-lived, for Dragovich wanted to see the effects of the gas first hand. He orders Reznov, Nevski, and Tvelin to be thrown in one gas chamber, and Petrenko, Vikharev, and Belov to be thrown in another. The latter was to be gassed first. Dragovich uses his weapon on Petrenko's chamber, killing everyone inside. Dimitri and his men suffer an agonizing death; caged like animals instead of dying for their country according to Reznov. Before Reznov's chamber can be condemned, British commandos break into the ship and fire a rocket into the chamber, opening it for Reznov and his men. The soldiers begin to fight their way out, battling through both their traitorous comrades and the British in a three-way battle, watching in horror at the same time as both rogue Russian and British Commandos fight against each other for Nova 6. Reznov arms explosives on the gas reserves, intending to destroy it, as well as a main support beam to escape. The player will be given 3 minutes to escape the ship. Tvelin is killed at some point during the combat towards the end of this mission, but Reznov escapes with Nevski, having destroyed the gas containers of Nova 6, the explosion also kills all the remaining people on the ship and the ship itself sinks to the bottom of the frozen water.

Reznov finishes his story in Vorkuta to Mason and learns that as long as Steiner was alive, he can reproduce the Nova 6 gas for Dragovich and his plans. Reznov questions if the United States will destroy or misuse the gas, then swears that Kravchenko, Dragovich and Steiner must die. 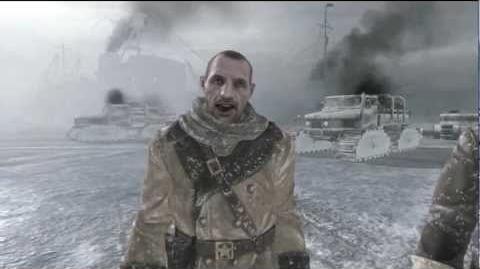 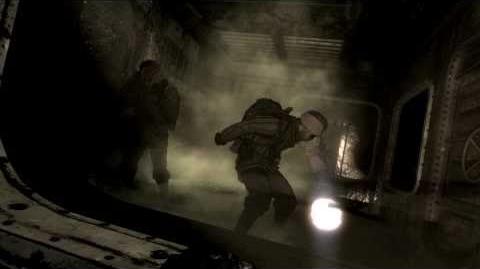 Concept art of the ship wreck.

The Nazi's launch plans for Nova 6-tipped V-2 rockets. The launch base appears to be located on Baffin Island in Northern Canada.

A German and Russian Fist Fight.

The arrogant Dr. Steiner is waiting.

The men in the ship.

Reznov and his friends being sent to their deaths.

Petrenko before his death.

Original Nova 6 shipment is sent to the depths of the Arctic Ocean.

Examples of the lower res models used at the start.