Projekt Endstation (German: Project Terminus) was a secret Nazi research program featured in the Zombies mode of Call of Duty: Black Ops Cold War. They are also mentioned in Call of Duty: Vanguard.

On August 3rd, 1943, under the authorization of Doctor Kurt Diebner, Projekt Endstation was established at a remote site in Morasko, Poland. The project, helmed by Doctor Ulrich Vogel, was intended to oversee the creation and production of atomic armaments for the war with the use of an experimental cyclotron particle accelerator. On March 7th, 1944, during the twelfth test run of the cyclotron, the device would malfunction and breach the Dimensional Membrane to the Dark Aether, leading to an infestation of necrotized soldiers, as well as several artifacts bonded to various Elder Gods originating from the Dark Aether activating. Five days later, Vogel reports that the cyclotron was now powering itself, and that through the use of observational instruments, the team of Projekt Endstation discovered the existence of the Dark Aether parallel to their own universe. With this sudden breakthrough, Projekt Endstation began redirecting it focus from atomic research to harnessing the power of the Dark Aether, more specifically Exo-Element 1 (later referred to as Aetherium).

With the Reich's defeat drawing ever closer, Ulrich Vogel proposed "Operation Baldr", a plan that would send a Nazi army through the Dark Aether to return to an Endstation lab in Berlin sometime in the future. Operation Baldr took place on January 27th, with Endstation's personnel evacuating the area and Vogel overseeing the arrival of Task Force Baldr into the other dimension. One week after the facility's abandonment on February 3rd, the site was discovered by the Soviets, who stumbled upon the undead inhabiting the facility and the still-active cyclotron. Determined to stop the breach, NVKD Colonel Pavel Lazarev sealed a man by the name of Kazimir Zykov inside the facility in a desperate attempt to deactivate the cyclotron. Zykov was successful, despite his disappearance, and the dimensional tear to the Dark Aether was closed for the time being.

In 1983, Omega Group, seeking to harness the Dark Aether's power for themselves, came to find the abandoned Projekt Endstation site, seeking to reactivate the cyclotron simply for the repercussions. Under Omega Group's orders, Lieutenant Orlov and Officer Medvedev, despite their eventual demises, successfully reactivated the cyclotron, and as a result, caused smaller dimensional tears to open across the world. To combat this new threat, a CIA-backed organization called Requiem was established by the Deputy Director of the DS&A to combat the undead hordes and discover the source of the dimensional breaches.

Their investigations, in addition to information provided by Samantha Maxis, led to the discovery of the Projekt Endstation facility, and on November 13th, 1983, Requiem forces were dispatched to the facility in an effort to contain the breach. During their time at the facility, the Requiem team was able to partially-resurrect Orlov with the use of Doctor Vogel's Der Wechsler machine, who then assisted the team in dismantling the cyclotron. With the site critical as a result of the cyclotron's overload, Requiem was forced to evacuate, leaving the site to be destroyed by the cyclotron's destruction.

Later, Vogel's daughter, Angelika, who had infiltrated the Omega Group, opened a portal to the Dark Aether beneath the hidden Endstation lab in Berlin, causing an Outbreak in an East Berlin checkpoint with the necrotized Task Force Baldr. She would be thwarted by the Requiem Strike-Team captured by Omega, and the portal closed. 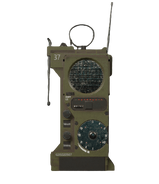 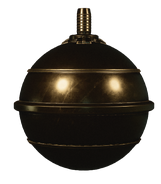 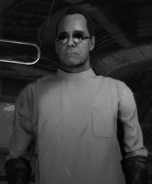 The Projekt Endstation logo at Morasko.

A photograph of Ulrich Vogel and Oskar Strauss at Morasko.
Community content is available under CC-BY-SA unless otherwise noted.
Advertisement