Call of Duty Wiki
Register
Don't have an account?
Sign In
Advertisement
in: Call of Duty: Modern Warfare Remastered Handguns

The Prokolot (Russian for Punctured or Pierced) is a three round burst handgun that appears in Call of Duty: Modern Warfare Remastered. It was added on the May 2nd, 2017 update as a part of the Operation Lion Strike collection. It is unlocked once the player completes the Prokolot bounty and is only available in Multiplayer.

The Prokolot kills targets in 3-6 shots depending on range. Stopping Power reduces this to 3-4 shots. At close range, Stopping Power has very minimal benefits. Hitting the head with Stopping Power at close range reduces the number of bullets required to kill by one. Using Double Tap to increase rate of fire is a more reliable way of increasing damage.

Assuming that all three rounds of its burst hit their target, the Prokolot has superb time to kill within its effective range. However, if it does not kill in one burst, time to kill lags behind the semi-automatic pistols. The range at which it can kill in three shots is also extremely short. The Prokolot is significantly worse than other pistols at engaging targets at medium to long ranges, as the moderate recoil combines with the burst-fire to require multiple bursts to kill opponents. As with most side-arms, the Prokolot can be suppressed; however, this reduces range significantly and can greatly harm performance due to the much weaker bullets outside of effective range.

The Prokolot is comparable to the M93 Raffica in Call of Duty: Modern Warfare 2. Both weapons are from the modern era, fire in three-round bursts, have similar rates of fire, and similar reload times. However, the Prokolot does less damage, has a smaller magazine size (reducing total starting and maximum ammunition), more recoil, and less range. 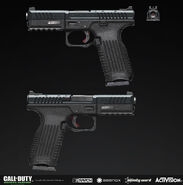