Pronaide is a cut perk from the Call of Duty: Black Ops Zombies map Ascension, similar to Tufbrew. It is never mentioned by name by any character's quote - with the only remnants of the perk being the sound files under the name perk_pronaid. Richtofen mentions the fact that Pronaide makes the player dive to prone faster. It has been speculated that this perk was an early version of PhD Flopper, because when its assumed effects and Tufbrew's are combined, it produces an effect similar to PhD Flopper. 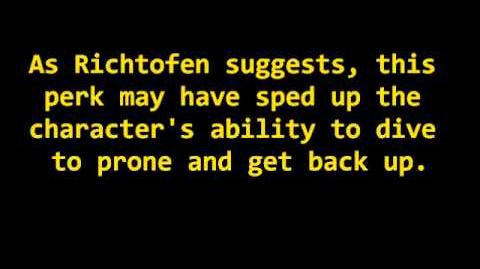 Video of the character's quotes referencing the perk.

Retrieved from "https://callofduty.fandom.com/wiki/Pronaide?oldid=2334361"
Community content is available under CC-BY-SA unless otherwise noted.