· Complete 20 matches where you got kills with the Trek-50 and the M.2187 (MP)
· Free via Season Pass
· Unlocked via Supply Drops
· Obtained via Magic Wheel (ZM)

The Proteus is a sniper rifle that was added to Call of Duty: Infinite Warfare in the June 27th, 2017 update. The Proteus is very unique in that it is a pump-action sniper rifle/shotgun hybrid, and behaves as a buckshot while hipfiring and as a slug while aiming down the sniper scope. In sniper mode it fires four projectiles per shot, while in shotgun modes it fires around eight pellets. There is also a difference in magazine size between modes, the sniper mode with a slightly increased size compared to the shotgun mode. The difference gap is increased with Extended Magazines and by upgrading in Zombies. Loaded shots are not lost by alternating modes so the shotgun mode can be prepared with more rounds by reloading in the sniper mode.

The Proteus can obtained from the Magic Wheel in all maps for 950 points. In The Beast From Beyond, it appears on the floor in a doorway for 1250 Points.

The Proteus in sniper mode 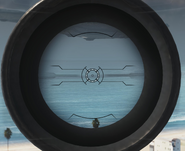 The Proteus in shotgun mode

Aiming while in shotgun mode