Psychosis is a Specialist Ability specific to Reaper. It deploys three procedurally generated decoys of Reaper to confuse opponents.

The Reaper and the clones will all appear as a translucent yellow as enemies or blue when activated by a friendly while the effects last. Destroying a clone will reward ten score to the player's scorestreak. A player can destroy their own clones and be rewarded the ten score.

The clones follow a simple behavior pattern. They will only move forward, but will follow the map's paths, such as through doorways and bends. Sometimes they may stop and crouch, but that is the extent of their behavior.

They do not look around, shoot, or otherwise interact with other players. When activated underwater, the clones will simply float in place, making for poor decoys. Hitmarkers on the clones produce a different sound effect when damaging them, making it easier to tell them apart from the real player.

Unfortunately the clones will trigger the player's own Trip Mines and Shock Charges and may sometimes cause a suicide.

A decoy deployed by a friendly. 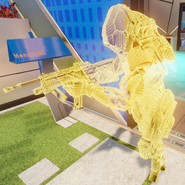 A decoy deployed by an enemy.
Community content is available under CC-BY-SA unless otherwise noted.
Advertisement