Pulsar is a payload for Phantom in Call of Duty: Infinite Warfare. It is unlocked at level 49. Pulsar highlights enemies, even through solid walls, which is useful for defensive and aggressive play styles. However, the cooldown time on the Pulsar may render this payload as moot for the latter.

This payload can be easily countered by the Hardwired perk.

The Pulsar cooldown was originally 150 seconds, however this was decreased to 120 seconds in th February 3rd, 2017 update[1]. The time for being marked by a player using Pulsar was also decreased from 6 seconds to 5 seconds in the same update. 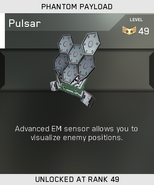 Pulsar being unlocked in multiplayer