For other uses, see Flamethrower.
For similar weapons exclusive to Zombies, see Gauntlet of Siegfried and Hellfire.

The Purifier appears in Call of Duty: Black Ops III as a Specialist Weapon exclusive to Firebreak, and obtainable by Blackjack.

The Purifier is exclusive to Krystof "Firebreak" Hejek, but can be obtained by Blackjack through his Rogue ability. It functions similarly to the M2 Flamethrower, and can be used as a useful close-quarter combat weapon. Once hit, enemies will slowly burn and die, regardless of how many times the Purifier hits, though they will go down much faster when its fire stream continuously hits them.

A huge weakness of the Purifier is its range. The fire stream can extend several meters, but it takes time to reach full length. Enemies in close proximity can be hit almost immediately, but it may take a second or two to hit enemies further away. If the player can predict where an enemy is approaching, it may be beneficial to start firing early so that the stream is at full length when engaged.

Another huge weakness of the Purifier is its inability to kill immediately if it only hits once. If confronted face-to-face with the Purifier, an enemy can gun down the player before they die, trading kills and ending its use early. This is not a problem in Hardcore game modes, as it is guaranteed to kill in one burst of flames, though the use of a Specialist Weapon in Hardcore when all weapons can kill in one or two shots is questionable at best.

The Purifier is very easily capable of exposing the player's cover. Shots with the Purifier appear on the mini-map and are fairly audible even if far away, alerting enemies to its usage. As such, care must be taken when using the Purifier to not get gunned down at a medium distance, where the Purifier may not be able to even hit the enemy at all.

The Purifier is usable underwater but as a small, blue flame. This significantly decreases its effective range.

The Purifier appears in a Power-up form in Dead Ops Arcade 2: Cyber's Avengening, replacing the M2 Flamethrower from the original Dead Ops Arcade. The Purifier's effectiveness is debatable, since it may take some time for it to kill zombies, although its long ranges compensate for the low damage, allowing the player to burn many zombies at a time.

The Purifier in first person 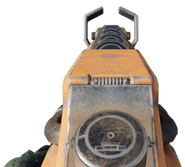 Firing the Purifier in third person

Firebreak with his Purifier

Pre-alpha model of the Purifier.

The Purifier returns in Call of Duty: Black Ops 4 as a Specialist weapon exclusive to Firebreak and a weapon in Blackout. It's almost identical to its Black Ops III version, but with a new appearance.

"Flamethrower that blasts a stream of scorching fire within close range."
— Description

The Purifier returns in Call of Duty: Mobile as an Operator Skill.

The Purifier releases hot fire at the enemies, killing them slowly under the scorching heat. However, it requires the player to keep burning the enemies once setting them on fire, as the fire itself will not deal enough damage to score a kill. Also, the closer the player to the target, the better the Purifier works.

The Purifier was added to Battle Royale in Season 11. It shoots extremely hot fire at the enemies and deals a lot of damage even to the most well-armored player. It fires Ballistic Expert ammunition, allowing it to be reloaded, however the reload takes a mere 4 seconds to be completed. The Purifier can only be found in Airdrops or in the Aerial Platform as a Legendary weapon.

A variant of it can be mounted on Tanks in Tank Battle. A tank blueprint centered around it can be found in Airdrops.

An operator firing his Purifier

"A special high-pressure liquid ejector that causes continuous damage to enemies within a certain range. Send them to a watery grave."
— Description of the H2O variant

A Legendary variant, the Purifier H2O, was added on July 29, 2020 as part of the Season 8 The Forge update, during the Days of Summer event. Its statistics are the same as the base version, with the exception being that it shoots water instead of fire.