Main Objective: Rescue Woods
• Prepare for incoming MPLA attack
• Push forward with the convoy
• Eliminate the mortar crews
• Destroy the first wave of tanks
• Eliminate the mounted gunners
• Destroy the second wave of tanks
• Mount the Buffel to lead the final push
• Secure the barge and rescue Woods
• Destroy the gunboats
• Search the container for Woods
• Use the Valkyrie launcher to destroy the Hind
• Enter village and find radio
• Approach and overpower radio operator
• Fall back to the river
• Defend position

"Pyrrhic Victory" is the first campaign mission in Call of Duty: Black Ops II, and the first set in the 1980s. In this mission, Alex Mason is called out of retirement by Jason Hudson to rescue their old friend, Frank Woods, who has been captured by Raul Menendez in Angola during that country's brutal civil war.

The mission initiates with Alex Mason vainly attempting to rescue an ally trapped in a burning Buffel. Mason tries to enlist assistance from UNITA commander Jonas Savimbi, but the latter remarks that it is too late as the militiaman succumbs to the flames. After offering Mason a machete, Savimbi notes that mortar fire from MPLA positions indicates their rivals' pending assault and rallies his troops for a counter-offensive.

Advancing in the surviving Buffels and a squadron of Eland-90 armored cars, Mason and the UNITA contingent halt upon encountering MPLA infantry. As the battle begins Savimbi charges Mason with eliminating the opposing mortar positions while Jason Hudson, providing aerial reconnaissance in an Alouette gunship, conducts a strafing run. Mason assumes control of the helicopter's weapons system, subsequently annihilating a unit of attacking T-62 tanks. Hudson comes under fire from several technicals in the area, which Mason also dispatches. His gunship returns and a second tank company is obliterated. At this point Savimbi concludes that the MPLA has been decisively weakened and determines to finish them. UNITA's final push successfully wipes out the remaining MPLA forces.

Hudson lands to pick up Mason; Savimbi informs them that their missing quarry, Frank Woods, is being held on a transport barge in the Cubango River. They depart to rescue Woods, but over the Cubango the Alouette is crippled by an RPG. Hijacking the barge, Mason utilises two mounted DShK machine guns to take out pursuing MPLA patrol craft. Once these gunboats have been repulsed the Americans uncover a disoriented Woods, trapped in a shipping container with several rotting corpses. Their reunion is cut short when an enemy Mi-24 Hind attempts to sink the barge. The Hind is downed with Valkyrie Rockets, but not before Woods and Hudson run aground. Bearing Woods, they flee into the nearby jungle, stumbling across a communications outpost manned by Cuban military advisers. Hudson proposes that they use any radios there to contact the UNITA for evacuation.

Infiltrating the outpost, Mason approaches radio operator Raul Menendez. Menendez destroys his equipment rather than surrender it, and tries to stab Mason when the latter uses him as a human shield. In the ensuing struggle, Menendez is shot in the face while Hudson, Mason, and Woods make a hurried getaway - holding back their assailants until they can reach the river. There, a second Hind confronts them: this aircraft is revealed to be Savimbi's exfil. As Hudson boards he is wounded by a Cuban soldier, who receives his final comeuppance from Woods as the trio make their escape. 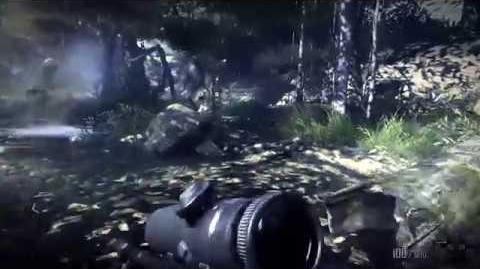 Savimbi to the rescue