For a similar revolver in Call of Duty: World at War, see .357 Magnum.

The Python is the main secondary weapon of Mason. It first appears as a usable weapon in the mission "Executive Order" and is used in "S.O.G." to shoot the NVA who is about to kill Woods. It is later used in "Victor Charlie", in clearing a Viet Cong tunnel with the Flashlight attachment. The Flashlight is held in the Harries technique, just like the Tactical Knife in Call of Duty: Modern Warfare 2.

Later, in "Payback", a snub nosed Python is used by the VC Bookie in a game of Russian roulette between Mason and Woods. After the gun fails to fire on Woods, Mason, gambling the next shot is in the gun, uses it against one of his captors and kills him. The gun is unusable for the rest of the mission, presumably since there was only one round put in it, so the Bookie's CZ75 is kept instead.

The Python will always kill an enemy in a single hit, and is capable of tearing the limbs of Viet Cong enemies encountered in the tunnel.

The Python is unlocked at level 18.

The Python is far and away the highest damage per bullet pistol. Up close, the Python will deal 50 damage, netting a two shot kill. However, this damage will quickly drop off to 30 damage, where the Python deals a four shot kill. Due to the Python's low damage at a distance, it is ill advised to use the pistol at range unless paired with a Shotgun. The Python is the only pistol to be a one shot kill at all times in Hardcore game modes (not including Second Chance users or shooting through objects), making it one of the strongest secondary weapons in the game mode to use. The Python has a step up in penetration power compared to other pistols, where it has medium penetration power, in line with the Assault Rifles and the Kiparis.

The Python is semi automatic, and will fire at a maximum rate of 625 RPM, equal to all other pistols bar the ASP and the fully automatic CZ-75. Attempting to shoot faster than 625 RPM will initiate the firecap and reduce RPM.

The Python is considered below average on the accuracy front. The iron sights are quite clear, but the recoil of the Python is very strong, kicking diagonally upwards to the right with every shot. Counteracting this recoil is a centerspeed of 1500. While 1500 is a lot more centerspeed than some other pistols like the ASP, the Python's monstrous recoil per shot offsets this enough to where the Python can be considered the least accurate pistol in its category with little question.

The Python has odd handling traits. The Python can be raised and lowered quickly, the hip-fire spread is the smallest in the game, the aim down sights time is quick at 150 milliseconds, but the reload properties are very odd. The Python reloads rounds individually. This makes reloading one or two rounds fairly quick, but if the player is loading at least two rounds, the Python easily has the slowest reload out of all the pistols, and six individual rounds result in the second slowest reload speed in the game, before the SPAS-12.

The Python has a limited capacity due to its revolver mechanism. The Python is restricted to just a six round capacity, and the Python, like the ASP, is restricted from using Extended Mags. This is the smallest magazine capacity out of all the pistols, which makes it so players must make their shots count.

The Python has a very bizarre selection of attachments, having three unique attachments in its category. The ACOG Scope will give the Python the standard reticule for American based weapons, but the scope itself is small. As a sight, it doesn't serve much purpose on the Python, which already has amazing iron sights. However, the ACOG Scope has a key benefit: it increases the Python's two shot kill range. This increase in range is extremely valuable to a weapon as dependent on damage as the Python. The two headshot range is nearly doubled with the ACOG Scope, but the range at which the Python starts dealing minimum damage is unchanged. The ACOG Scope is very much worth consideration on the Python, but not in Hardcore game modes, where this range increase means very little.

The Snub Nose will increase the Python's centerspeed to 1800, making the Python's recoil very easy to manage due to the extreme value. However, the Snub Nose will decrease the Python's maximum damage to 40, making it so the Python is incapable of killing opponents in two shots sans a Headshot. This devalues the Python, which makes its damage output too similar to a pistol to be worth using in Core game modes. In Hardcore game modes, however, the Snub Nose Python sees little to no reduction in performance, making the attachment very valuable to use if wanting to use the Python in Hardcore. As well, the Python sees no reduction in performance at range, as the minimum damage remains at 30. Due to this, this makes the Python one of the best pistols to engage targets at a distance.

The Speed Reloader will make the Python reload all six rounds at once instead of reloading rounds individually. This makes reloading slower than a singular round reload, but much faster than multiple round reloading. The Speed Reloader makes the Python much more dependable as a secondary, as it doesn't need as much support through class selections like the inclusion of Sleight of Hand. The Speed Reloader is arguably the best universal attachment, as it doesn't fault in any notable areas like the ACOG Scope in Hardcore game modes, the Snub Nose in regular game modes, or Dual Wield at longer distances.

The Python is a one-shot kill in the early rounds. After that it becomes a two-shot kill to the chest, but remains capable of one-shot kills, provided they are headshots. It is often not favored in Zombies, due to its low capacity and slow reload. It can, however, be a powerful secondary to use in a pinch, like the Pack-a-Punched Colt M1911.

When Pack-a-Punched via the Pack-a-Punch Machine, the Python becomes the Cobra, which doubles the magazine size, giving it 12 shots per cylinder with 96 extra rounds and the Speed Reloader attachment. The damage up-close does not increase but its damage at range does which may occasionally be useful at long range engagements.

The Python does not appear in the Wii version of the game.

Diving with the Python

Reloading the Python; notice that spent cartridges are being inserted

Side view of the Python

Third person view of the Python

Render of the Python

The Python with Flashlight

Older version of the iron sights

The VC Bookie gives the snub nosed Python to Mason

Mason pointing the snub nosed Python at himself

The Python in Call of Duty: Black Ops Zombies

The Cobra in Call of Duty: Black Ops Zombies

"The Python .357 magnum revolver. No thank you, I have reproductive organs of my own."
— Marlton Johnson, when obtaining the Python from the Mystery Box in Green Run.

The Python returns in Call of Duty: Black Ops II, only available from the Mystery Box in Zombies mode, and briefly seen in the campaign (only seen holstered and carried by Jonas Savimbi). It is exactly the same as its Call of Duty: Black Ops counterpart, being able to get one-shot kills up until round 9 and is a good backup weapon to use if in a pinch. Its downsides are it holds six rounds which can run out fast if fired quickly and the fact that it reloads one round at a time. Its Pack-a-Punched counterpart, the Cobra, also functions the same as its Call of Duty: Black Ops counterpart. It doubles the magazine size, is a one-shot kill until round 16, and adds a Speed Reloader (via the Fast Mag attachment), making reloads significantly quicker. As well, the minimum damage is doubled. Like all other non-2025 weapons, it can only be Pack-a-Punched once.

Both the Python and the Cobra can benefit significantly from Speed Cola due to the faster reloads, and benefit extremely from Double Tap Root Beer, due to the weapons effectively obtaining double the damage

The Python only appears in TranZit, Die Rise, Nuketown Zombies and Origins. It does not appear in Mob of the Dead (but it seen in the cutscene with a snub nose barrel) or Buried (where it is replaced in function by theRemington New Model Army). 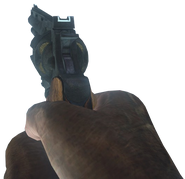 The Python in first person

A Snub Nosed Python in the Mob of the Dead cutscene

The Mobsters firing Pythons during the Mob of the Dead cutscene