The QBB LSW is unlocked at the start of the 2025's missions. It can be found in the levels "Celerium", "Fallen Angel", "Karma" and "Judgment Day". It can be found as well in the Strike Force missions "FOB Spectre", "Shipwreck" and "Dispatch".

The QBB LSW is available for unlock when Create-a-Class is unlocked.

Damage wise, the QBB deals the lowest damage per bullet in its category. It will always be a 3 to 5 shot kill, as there is no headshot multiplier. This, thankfully, is remedied by having the highest rate of fire in its class, at 937 RPM. However, the high RPM will quickly deplete its smaller 75 round magazine, so a player concerned with constant reloads may be deterred away from this weapon. As well, its range is the worst in the LMG category, as it loses its 3-shot kill potential at around 19 meters, which is more similar to the range of an Assault Rifle.

When accuracy is concerned, it's stereotyped that the QBB-LSW is very inaccurate, but in reality, the QBB-LSW can actually be quite accurate. Although the ROF is extremely high, the recoil isn't extremely large. The iron sights are a mixed bag. Some may like its simplicity, but others may find it too hard to aim the small front sight accurately.

Handling of the QBB-LSW is mostly on par with the other LMGs. The aim time is slow, at 0.45 seconds. As well, the hip-fire spread is very large (however, the ROF can remedy this to make hip-firing somewhat reliable), and mobility with the weapon is very low. However, it has the absolute fastest reload of all of the LMG's, at 3.75 seconds/4.6 seconds, depending on if it's an empty or full reload.

The QBB-LSW has the usual sort of attachments for its category. All of the optical attachments barring the Millimeter Scanner are available, allowing for a variety of combos to be made. The Red Dot Sight, Hybrid Optic, Holographic Sight, and the ACOG Scope all consist the lower-power optical attachments. They can be used as alternatives to the Target Finder and Dual Band, or they can just be used to bypass the iron sights. Usage of them is up to a player's preference.

The Variable Zoom gives the QBB-LSW a sniper scope, which can be useful for medium-long range gunfights. The Dual Band can make a bride between the Variable Zoom and the Target Finder, allowing for a very accurate weapon. The Target Finder can provide a lower zoom alternative that can help the user's awareness over long sight-lines.

Modifications can severely affect the QBB-LSW's handling. The Suppressor can turn it into a silent horror at medium range, but it will also cut down on the QBB-LSW's already terrible range. Extended Mags will create a 100 round drum, but will make the swifter reload time a bit slower. It is often looked over, but it can save the user from a premature reload during a gunfight. Rapid Fire will increase the ROF to around 1250 RPM. This is often viewed as overkill, as the recoil becomes terrible, the 3-hit kill range is reduced to less than 10 meters, and users will find themselves reloading extremely often. The Laser Sight can improve the QBB-LSW's hip-fire, and can create a potentially deadly close-quarters weapon, rivaling even Submachine Gun's, due to the QBB's high ROF. The Quickdraw Handle and Adjustable Stock can improve the QBB-LSW's bad handling characteristics, hastening the ADS time and increasing movement while in ADS.

Firing when crouched with the QBB LSW increases centerspeed (how fast it takes the sight to return to position after firing) by 10%, and firing while prone grants 20% faster centerspeed. This reduction in recoil makes firing while crouched or prone more accurate than while standing, at the expense of mobility.

The QBB LSW in first person 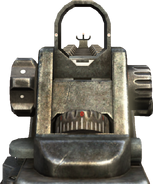 The QBB LSW is automatically given to Xiao during the mission "Multilateral Operation" to assist the J-SOC team.

In multiplayer, it is not unlocked until buying the "Heavy Package" Care Package, which includes a new perk called "Machinegunner" that increases the damage of light machine guns, three Frag Grenades, and the QBB LSW.

The QBB LSW returns in Call of Duty: Mobile as the S36.

After the nerfs, the S36 has very hard-to-control recoil patterns, especially the bouncy horizontal recoil. Its magazine size was reduced. However, with high fire rate and good damage, it can still be very deadly at medium to close range if the player has pre-aimed.

The S36 has mediocre damage and high rate of fire, however it has very bouncy recoil patterns. It can only be equipped as customized blueprints found inside Airdrops.