Second-in-Command of the Iranian Terrorists

"You Americans have rules! You have rules!"
— Qasim Javadi to Alex Mason.

Qasim Javadi was born in northwest Iran in 1946, inside the short-lived USSR puppet state of the Azerbaijan People's Government. He grew up in poverty but showed exceptional promise as a student. At age 18 he left his family to attend the University of Tehran, intent on becoming a doctor, but dropped out dissatisfied. Qasim became increasingly attracted to the political resistance movement in Iran.

After encountering Arash Kadivar at a secret group meet-up in Tehran, Qasim entered the fold, becoming a key ally in Kadivar's plan to undermine the government of the Shah.

Qasim Javadi, Arash Kadivar, Anton Volkov, Franz Kraus, Vadim Rudnik and Robert Aldrich, were associates of Perseus whom he sought out to subvert the United States.

He became the second-in-command of Arash's Iranian terrorist group, where he managed the finances while Arash organized the group's activities, one of the many assets of Perseus himself.

Hans, the police chief of Amsterdam informed Adler and Mason about Qasim whereabouts at an apartment nearby. The two left the bar, met with Woods and struck Qasim's apartment, taking out Qasim's men along the way. Qasim attempted to escape but was cut off, his bodyguards killed. The three interrogated him on Arash's location. Fearing for his own well-being, he told them Arash was in Turkey scheduled to meet someone at Trabzon Airfield.

Mason kills Qasim after he reveals the information, either by throwing him off the building or shooting him. If Mason does not kill him and let him go, Adler will do so instead.

Mason decides that Qasim is a valuable hostage and knocks him out. He is then placed in CIA custody and convinced to help them; in return for doing so, the CIA help protect and spread his influence. 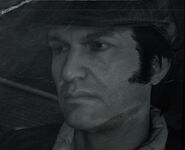