Abandoned quarry, many levels of elevation and windows

Quarry is located at a large rock quarry somewhere in Brazil, indicated by the Brazilian flag shown on one of the buildings. It has excellent sniping positions located all over the map, however most have become well known and even the most experienced snipers will find difficulty in surviving in one spot after neutralizing several enemies. The map also features buildings and pathways allowing for good close-range combat. This map is excellent for all types of weapons, with sniper and assault rifles making use of the longer ranges, and SMG/shotgun runners making use of the small pathways in between and around the rocks.

In some places players are able to climb up onto the cut out stones themselves, and make use of the high ground for some excellent sniping positions. Unfortunately, if the Desert Ghillie Suit has not been unlocked, or an Assault Rifle is being used, players are extremely exposed the majority of the time - even the ghillie suit can stand out against the rock as well, in places. Furthermore, there are numerous amounts of camping and hiding spots inside all the buildings at the top of the quarry, such as several ladders reaching the top of one of them, players can go prone and neutralize targets entering the building. However, sniping spots, such as the one on the top gantry in the large warehouse, have become notorious, so many players will check them out for snipers before rushing out. 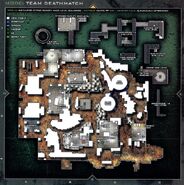 A more accurate view of Quarry.
Add a photo to this gallery 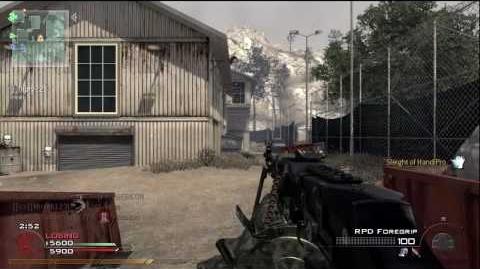 Retrieved from "https://callofduty.fandom.com/wiki/Quarry?oldid=2361966"
Community content is available under CC-BY-SA unless otherwise noted.