"Why? Why do you taste so bad?"
— Edward Richtofen

Quick Revive is a Perk-a-Cola in Call of Duty: World at War and Call of Duty: Black Ops that is featured in the game mode Zombies. It makes the player revive teammates 3x as fast.

Quick Revive costs 1500 points, making it tied with Deadshot Daiquiri as being the cheapest Perk in the game. Due to lack of teammates in solo, this perk in World at War is useless, and players are advised not to buy it. The icon for this perk is a grave with a man standing up from it. The background is blue with the main picture being white.

If the player hacks the perk and buys it again it will count as buying it a second or third time. 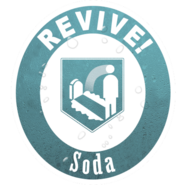 The Quick Revive logo. Note how it says Revive Soda instead of Quick Revive.
Moon Quick Revive machine ZM.png
Quick Revive seen in Moon, in the Rezurrection trailer.
Add a photo to this gallery
Retrieved from "https://callofduty.fandom.com/wiki/Quick_Revive?oldid=1223578"
Community content is available under CC-BY-SA unless otherwise noted.