Call of Duty Wiki
Register
Don't have an account?
Sign In
Advertisement
in: Call of Duty: Infinite Warfare Fighter Jets

The R-7 Skelter is a class of Skelter fighter jet capable of combat in air and in space in Call of Duty: Infinite Warfare.

It was developed by the Settlement Defense Front as its primary fighter jet and is classified as a dual-positional-wing multi-role combat aerospacecraft, but it is usually referred to as the "Skelter".

The Skelter comes in three variants: its base design, an Ace Skelter known as the R-16, and a stealth prototype armed with the GAMP .018 Microlite, which was later stolen by Special Combat Air Recon operative Nick Reyes from the SDF warship Cerberus.

It features flare countermeasures to counter incoming homing missiles as well as omnidirectional infrared countermeasure systems. The Skelter is measured at 70 ft. (21.5 metres) long and 10 ft. (3 metres) high. The Skelter is equipped with variable-geometry wings in order to easily transition and travel in atmospheres and in space. They also have a limited capability to hover.

The Skelter is equipped with two 30mm cannons and air-to-ground missiles (AGM). The cannons are controlled with a "modular articulating ballistic system", meaning that they have limited traverse, though unlike the Jackal it seems the Skelter does not have retinal tracking pivots to ensure the guns match the pilot's eyeline, at least on the R-7 (these were present on the stealth prototype however). Its tandem-seat cockpit has a maximum occupancy of a pilot and a copilot. 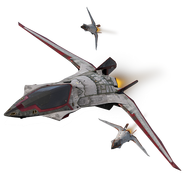