For for a zombie enemy who functions similarly, see Insanity Elemental.

The R.A.P.S. (Rolling/Robotic Anti-Personnel Sentry) is an enemy robotic vehicle in the campaign, a Scorestreak requiring 1300 points, and an enemy in the Zombies map Gorod Krovi that is featured in Call of Duty: Black Ops III.

The NRC use it as a robotic vehicle against the Player, Jacob Hendricks and the Egyptian Army while the protagonists try to hunt down and kill all of John Taylor's team after discovering they were behind the murders of the CIA Black Station staff in Singapore. After the interrogation with Salim is interrupted, the Player opens a door and witnesses a R.A.P.S. who attacks and kills an Egyptian Army soldier.

During the battle against Taylor atop the Lotus Towers, the enemy Mothership sends in several R.A.P.S to deal with the Player, but are destroyed and Taylor gets defeated, right before his death by the hands of Hendricks.

After killing Hendricks, the Player commits suicide to rid their DNI of Corvus and ends up in a simulated world controlled by him, where he sends several R.A.P.S. to attack the Player and Taylor before beating the simulation and purging their DNI.

Enemy R.A.P.S. units are vulnerable to being remotely hacked and controlled, as well as being reprogrammed into friendly robots.

It is a Scorestreak that can be used when earning a 1300 scorestreak. When activated, a destroyable VTOL Drone will arrive and drop off several R.A.P.S. causing a loud noise when landing, that will chase down enemy players and will explode when close enough to them.

They can be avoided if the player uses Cold Blooded.

The R.A.P.S. being deployed. 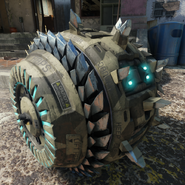 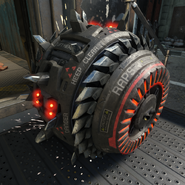 In Dead Ops Arcade 2: Cyber's Avengening, they appear as a power-up that the player can use against the zombies. They reappear in the map Gorod Krovi in the final boss against the original Nikolai when Nikolai uses them against the players.

R.A.P.S. appear in "Lotus Towers", where they are dropped by the Leviathan. They also appear as power-ups the player can collect which spawn a friendly R.A.P.S. Throughout the rest of the campaign, they are replaced by Insanity Elementals.