The R.A.W. is an energy light machine gun featured in Call of Duty: Infinite Warfare.

When all side missions are completed, the R.A.W. unlocks the Compressor upgrade, which allows the R.A.W. to carry double its normal ammo capacity.

The Compressor appears in the game's multiplayer as the Epic gun perk Make it Rain, which adds all reserve ammo to the primary magazine, disabling the ability to reload.

The R.A.W. is unlocked by default.

The R.A.W is obtained on every map by spinning the Magic Wheel for 950 points. It has a nice amount of damage and a good ammo stock. Despite dealing less damage than a normal bullet weapon, the R.A.W has a nice headshot damage, killing in one shot until 35 with two Pack-a-Punch upgrades. When using the Liberty variant, the weapon loses one clip but the rest of the ammo becomes the clip, removing the need for a Quickies while giving a move speed bonus, becoming as light as a SMG. The Thug upgrade serves as a extra money maker while maitaining the high damage potential.

The R.A.W. in first person

Iron sights of the Liberty variant 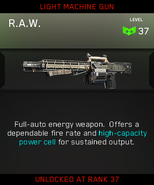