The R3K is an energy burst-fire bullpup assault rifle in Call of Duty: Infinite Warfare. On September 7th, 2017, it received several updates. There had been a minor reduction in ADS time and sway, and also received lower burst delay, which all make the weapon more effective.

When all side missions are completed, the R3K unlocks the Full-Auto upgrade, which initiates a "software hack" that enables the R3K to fire in a full-auto configuration.

The Full Auto upgrade appears in multiplayer as the Epic gun perk Break Point, which serves the same function for the R3KT variant.

The R3K, along with the NV4 is the first assault rifle to be unlocked in Infinite Warfare, at rank 4. It is an energy-based, burst fire assault rifle.

Being a burst fire assault rifle, it has good range, excellent damage, and low recoil, at the downside of having a burst delay, meaning that missing shots with the R3K can be lethal. The weapon can one burst until 30 meters, which is fairly good, considering the only other weapon that surpasses the R3K in damage range is the Volk and its variants. It only drops down to a four shot kill, meaning that it requires only most of two burst to kill and enemy at long range.

With accuracy, one bursts are common, killing extremely quickly. However, when bullets are missed, the R3K drops down to having the lowest TTK of any AR. It is interesting to note that this weapon has quite a bit of idle sway, and that it kicks in faster before other ARs start swaying, meaning this weapon is best at mid range. This further hampers the one burst ability, so prolonged aiming is not this weapon's strong suit. However, constantly aiming, breaking aim, then aiming again seems to significantly reduce idle sway.

Within the burst, no other gun in the game, with the exception of the FHR-40 and some combat rig payloads, can kill as fast as this weapon, or as slowly. This weapon takes a while to get used to, but once mastered, this weapon is very powerful indeed. This is even more so amplified when using the rare "Spearhead" variant, which, on top of the R3K already recieving updates lowering its burst delay, reduces it even further, making it shoot quite a lot faster over all.

The Reflex Sight is a basic, and free sight that is a good replacement to the R3K's clear, but rather small Iron sights. Being that it has minimal zoom, idle sway is magnified very little, it is possibly the most versatile and useful sight on the R3K.

The Scout Hybrid has two sights with different levels of zoom and peripheral vision, appearing to have a long ranged optic along with a free ELO sight, allowing a versatile blend of cleanness and long range target acquisition.

The Trojan sight will illuminate enemy targets regardless of brightness and some obtrusions, such as smoke. It has a low level of zoom and a wide field of view within the sight, so it might be useful for mid-long range engagements.

Another great sight for the R3K, the VMC sight, is another powerful sight for the R3K, being a normal Reflex Sight and then with a flick of a switch, viewkick is reduced, the center speed is increased, and targets are highlighted with a high level of zoom. This makes the R3K practically a laser, and since this weapon has a decent range, it can be used to good effect at mid-long range. It makes use of a Reflex Sight practically useless, with free perks to boot.

The ELO sight is a very clear, having excellent peripheral vision, with the same reticles as the Reflex, making it functionally better.

The Thermal Scope is another sight useful on the R3K, since it has a higher than average zoom, while making targets very easy to spot within the surroundings. Keep in mind, however, that anyone using the Cold-Blooded perk will not be illuminated, and will blend in with the blue background, the same effect applying for the VMC and Trojan sights.

Using the Foregrip is a waste of an attachment slot, since the reduced kick only barely makes the gun more accurate.

The Quickdraw Handle can be very useful, halving the time for target acquisition and obliteration, making practical TTK decreased.

The Fusion Mag, may be an effective attachment, since the R3K can run through its magazine quite quickly, and having the ability to have infinite ammo between gunfights is excellent. Keep in mind that reloading the R3K with Fusion Mag is a permanent loss of a mag.

The Suppressor is a hit or miss attachment, since it keeps the player off the radar from enemy players, but at the same time, reduces the range of the R3K by 25%.

Particle Amp increases the range of the R3K by 20%, quite significantly increasing the range, to make the one burst kill potential until 36 meters. However, unless using the R3K outside of mid to long range, this attachment is useless. When the Amp and Suppressor are combined, a net 10% reduction range is attained, or three meters. This further wastes attachment slots to not completely cancel out the range reduction of the Suppressor, so it is advised not to do so.

Faraday Slug is a good attachment for players with good accuracy, since at least one headshot at any range would reduce the bullets required to kill by one, excluding within 30 meters.

The Stock might be a waste of an attachment, only partially increasing the speed at which a player strafes while aiming down the sights, and since the R3K has quite a bit of idle sway, Quickdraw is arguably a better attachment.

The Laser Sight is practically useless on the R3K, since hip firing with a burst fire Assault rifle usually ends fatally. Unless point blank or with no other option, never use this attachment.

Ram Servo is an interesting attachment, since shooting blindly around corners might give a player a chance to seek out a target without even knowing it is there, since it allows for double reflections. This is also useful when facing something like a Shock Sentry, since the Shock Sentry will not kill you behind cover, but it is fairly easy to do with the R3K. The increased reflection damage of the R3K, negated by it's burstfire makes for a very weird blindpeeking weapon. Fully automatic energy weapons are still more advised to use this attachment.

The Epic variant of the R3K, the R3KT is a fully automatic rifle of similar design, while sporting some key differences. Recoil is consistently dampened when compared to it's closely resembled Volk though also having an almost unnoticeably smaller rate of fire than the Volk. It sports a glossy red finish with the word "PROTOTYPE" imprinted on the left side. All camos used will have considerable wear, revealing the red skin of the gun under them. It also has an attached pseudo Fore Grip which is purely cosmetic though compliments the weapon's almost nonexistent recoil. The grips are also attached to each other via a metal bar and the gun appears to have a special spiked blue colored muzzle. Both reload animations happen from the left side.

Damage wise, the R3KT closely resembles the Volk because of it's Break Point perk, providing Fully Automatic fire. The 3shot kill range is up to 30 meters, making this weapon amazing for people not used to burst fire weapons but proficient with full auto ARs like the NV4. Anything above 30 meters is a 4shot range, further making this weapon easier to use at longer ranges. The suppressor doesn't negate this effect.

The 455 rate of fire however can prove a challenge against multiple opponents at close-medium range as simply spraying over an enemy might still result in missed shots or the shot delay saving the enemy player.

The Stockpile Perk also provides 36 rounds in the magazine with 72 in reserve without Man-at-Arms and can equip a fusion mag, like almost all energy weapons.

Equiping a Quickdraw is essential because of it's slow firerate to ensure survival.

Equiping a Fore Grip is a waste of an attachment slot as the recoil is nonexistent.

A Particle Amp further enhances the 3shot-kill range by 20%, thus making it a favorable choice.

A Faraday Slug will decrease the TTK by 1 if at least a headshot is induced, rewarding good accuracy.

Because of its slow firerate, the Laser Sight is still useless while using a quickdraw can be a lifesaver, even at point blank ranges.

Sights are more to personal preference but because of its range versatility, the Scout Sight can be a good addition for sporting both a long/ELO sight for both long/short ranges.

The R3K can be obtained from the Magic Wheel for 950 points in Zombies in Spaceland , Rave in the Redwoods , Shaolin Shuffle and Attack of the Radioactive Thing, while being a wallbuy in The Beast from Beyond , near Bombstoppers. Similar to the M1, the R3K has a strong headshot bonus capable of killing a zombie with a single trigger pull. The effect is amplified if the R3K is upgraded, and remains consistent even without the Faraday Slug. It is unlocked for customization at level 17.

Bang Bangs is reccomended to reduce the downtime between bursts (or increasing the rate of fire in the case of the R3KT Epic variant), however one must take care not to spam the trigger or else the recoil might be substantial. Deadeye Dewdrops is also recomended to take advantage of the previously mentioned high headshot multiplier, while negating recoil when rapid fired. Like most assault rifles, the R3K can benefit from a Stock attachment, allowing more mobility while aiming down sights, especially when training zombies.

When upgraded via the Pack-a-Punch Machine, the R3K becomes the RJ-24, gaining increased damage, a larger magazine, and more reserve ammo.

When upgraded a second time with the Alien Fuses, it becomes the Black Mamba, gaining more damage, as well as ammo in its magazine.

The R3K in first person 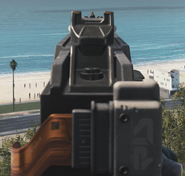 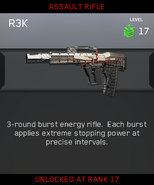 Concept of the R3KT variant, which was originally going to be an SDF prototype weapon

Retrieved from "https://callofduty.fandom.com/wiki/R3K?oldid=2449528"
Community content is available under CC-BY-SA unless otherwise noted.