The R9-0 Shotgun, also referred to as the DP-12, is a shotgun featured in Call of Duty: Modern Warfare and Call of Duty: Mobile. It is a high capacity weapon that can fire two barrels in a rapid succession before being pumped.

The R9-0 Shotgun appears in Call of Duty: Modern Warfare, and is manufactured by FORGE TAC.

The weapon appears exclusively in the mission Into the Furnace, under the name DP-12. It is used by Barkov's Forces, and is fitted with incendiary rounds.

The R9-0 Shotgun in first person 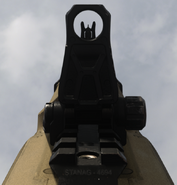 Kill 15 enemies with a Shotgun at long distance to unlock

The R9-0 returns in Call of Duty: Mobile. It was added in September 2021 as part of Season 8: 2nd Anniversary update.

The R9-0 is a blend between a semi-automatic and a pump-action shotgun to an extent, allowing for more than one shot to be fired before having to rechamber. The R9-0 has the most pellets per shot in its base configuration, at 12 compared to 8 to 10 pellets per shot (though the HS2126 beats it out with FF Birdshot at 20 pellets), and with its unique double-shot makes up for the lower damage. The R9-0 can be considered similar to the KRM-262, as both can perform fairly well at farther ranges while ADSing compared to other shotguns. However, the R9-0 can be rapid-fired quite a bit more thanks to the huge magazine of 14 rounds and the double-shot feature.

In terms of ammunition, players can attach the Tube Extension for 18 rounds total. A downfall of the R9-0 comes with its style of operation: It loads each shell one by one. Although reloads are faster than average, players are advised to keep the magazine topped up whenever possible or find sizable cover to reload the enormous magazine. As the R9-0 is rechambered before each even-numbered shot, it should not be kept at an odd number of shots as doing so nullifies the double-shot feature.

Compared to all other shotguns, the R9-0 is powerful, able to compete in CQC with a traditional single-shot kill, and moderately participate in mid-range combat with the range and lack of ADS spread. Overall, it is powerful where it needs to be and a fair choice for competing in places where most shotguns would fall flat.

Uniquely, holding down the fire button will fire off both shots before rechambering, but with timed presses, players can empty each barrel individually.