The RK5 (known as the Triton in the alpha build) is a three-round burst-fire pistol featured in Call of Duty: Black Ops III. It is similar to the B23R, having a short burst delay and a fast rate of fire within the burst.

The RK5 is used by Jacob Hendricks shortly in "Black Ops", where he fires it semi-automatically.

The RK5 is a moderate damage per bullet pistol. Up close, the RK5 will typically take either three or four shots to kill, and at medium ranges, typically five to six. While its damage doesn't match that of the MR6, it bests the L-CAR 9 up close in terms of damage. However, it loses out to both pistols in terms of range, which it notably lacks in comparison to its competitors. The RK5 doesn't shoot through obstacles very well, either, needing FMJ to shoot through most obstacles bar very thin plywood and glass. Its headshot multiplier makes it useless to hit the head in most situations without High Caliber.

The RK5's rate of fire is very impressive to compensate for its short range. The RK5 fires in a three round burst configuration, and the rate of fire within the burst is 909, making it the fastest firing pistol. It has a burst delay of 100 milliseconds, and the RK5 doesn't have the auto-burst option that other burst fire weapons have. Despite the burst delay and the lack of auto-burst, many will find the RK5 to fire very fast.

The RK5's accuracy is unimpressive. The iron sights are very clean, but the recoil is quite high, kicking in an almost uniquely upwards pattern, and heavily. Unless the player allows the recoil to settle between bursts, the recoil accumulates quickly.

The RK5's handling traits are good. The hip-fire spread is a decent size, the RK5 allows the player to move at the maximum possible speed, the RK5 aims quickly, and allows the player to strafe at 84% of the base speed. The RK5 reloads very quickly, taking 1.5 seconds to perform a reload. This is very fast, although not surprising, as the L-CAR 9 shares this reload speed.

The RK5's magazine capacity is small for a pistol, holding only fifteen rounds per magazine, or five bursts. This capacity is smaller than both the MR6 and the L-CAR 9. Combined with the RK5's inaccuracy and poor ranged potential, and the RK5 must be relegated mostly to point blank distance to be competent. The starting ammo loadout is also small, with only sixty rounds total being given to the player upon spawning.

The RK5 has all the usual pistol attachments. Quickdraw is a questionable choice. Although its effect is strong, it affects an area where the RK5 is already solid, so it may be an overkill option.

The optical attachments are not worth using on the RK5. If anything, they serve as a visual distraction, as visual kick is amplified with the sights.

Long Barrel isn't a powerful attachment, making it a poor choice even on the RK5. The Suppressor isn't as detrimental as it is on other weapons, and due to the RK5's already pathetic range, and the RK5 may, to some, look tailor-suited for the Suppressor.

High Caliber increases the headshot multiplier to 1.6x, making headshots extremely beneficial to obtain on the RK5. As well, due to the RK5's vertical recoil, one can "lead" the weapon's recoil into getting powerful headshots. Out of the three pistols, the RK5 may seem to get the most benefit out of said attachment.

FMJ is ill suited to the RK5. Although FMJ cures the RK5's terrible wall penetration abilities, the RK5's other traits make it inadvisable to shoot through walls even with FMJ.

Fast Mag is far from necessary, as the RK5's reload is already very quick. Extended Mag, however, can be very useful, giving the RK5 two extra bursts per magazine, and increases the player's reserve ammo to 84 rounds.

Dual Wield is a hit-or-miss option on the RK5. On one end, the RK5 becomes an extremely powerful weapon in close quarters, where the RK5 does best. On the other end, however, the RK5 loses any standing chance at a distance, and cannot be paired with other attachments. It is up to the player whether or not Dual Wield is for them.

The RK5 is available in Zombies. It is a wall weapon costing 500 points available in Shadows of Evil next to the box with the Summoning Key, around the corner from Quick Revive, as well as on The Giant where the Kar98k was initially on the original Der Riese. It also can be found in the left side of the spawn room in Der Eisendrache. The RK5 is a decent weapon for the player to initially buy at the start of the match, as it has a fast-cycling burst rate, decent damage (killing zombies in one burst for the first three rounds on the body or a higher round when headshots are done), and a decent magazine size. Compared to the Sheiva, the other weapon which can be initially bought, the RK5 has a higher magazine size, better mobility, and a higher rate of fire, as well as being burst-fire instead of semi-auto which can be a good thing in the Zombies mode. However, it can be harder to aim than the Sheiva, making it less viable for long-range, although long-range engagements are rare if not nonexistent in zombies

During My Brother's Keeper in Der Eisendrache, Dr. Groph can be seen putting an RK5 away in his safe in a flashback.

After completing the A Better Tomorrow achievement in Revelations by completing all previous easter eggs in the game, the RK5 becomes a starting weapon along with the Bloodhound, MR6, 1911 and Mauser C96. 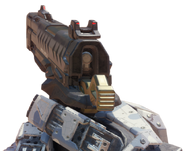 First person view of the RK5

Aiming down the sights of the RK5 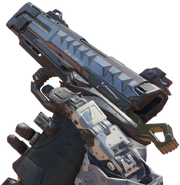 Chambering a round into the RK5