In the singleplayer campaign of Call of Duty 4: Modern Warfare, the RPD is frequently used by the Loyalists, Ultranationalists, and OpFor. To this end, it can be more useful than the M249 SAW in some stages, as ammunition is frequently available. A mounted form of the RPD can be found in the level "Shock and Awe" in the building after rescuing the stranded platoon, as well as the level "Safehouse" in two of the houses.

In multiplayer, it is available at level 4 and can be modified with a Red Dot Sight, ACOG Scope, or a Grip. It is primarily used for medium to long distances and is particularly liked for its magazine's high capacity as well as high power. It is capable of getting long distance kills as the recoil is less than the AK-47's visual recoil and it has no idle sway. Also, in terms of damage per second, the RPD is better than both the M249 SAW and M60E4 when using Stopping Power. The M249 SAW does significantly less damage per second than the RPD or M60E4, and the RPD and M60E4 take the same number of bullets to kill (except in close quarters or mid-range, where the M60E4 can kill in two shots without Stopping Power). Many players use the Grip to increase the RPD's long range capabilities.

In the hands of a skilled player, the weapon, even without any attachments, can be very powerful. A medium rate of fire of 700 rounds per minute as well as taking 2 shots to kill (with Stopping Power) make the RPD nearly unbeatable. Even more, it has rather low recoil, making it a preferred weapon by many. It is possible to earn a helicopter using only a fraction of the magazine. However, it does have some drawbacks, such as having the longest reload time of all guns and poor hip-fire accuracy, which can be mitigated somewhat by Sleight of Hand and Steady Aim. At close range firing from the hip, some players meet some success by waving the RPD slightly from side to side to compensate for the poor hip fire accuracy by taking advantage of the high rate of fire.

The RPD has fairly low recoil when fired automatically, so it is very helpful for keeping enemies at bay and spraying large groups of enemies down.

Mounted RPD as seen in the level "Safehouse".

Medium (without grip), Low (with grip)

The RPD is occasionally found on Russian soldiers throughout the campaign, as well as in the hands of the Brazilian Militia and Shadow Company soldiers.

It is one of two starting weapons in "Endgame" if the player does not play the level through the previous mission, along with the Mini-Uzi. But it is pretty much useless because the player is on the Zodiac most of the level.

It is usually found with a Red Dot Sight, ACOG Scope, or no attachments at all.

The RPD in Call of Duty: Modern Warfare 2 handles very similarly to how it does in Call of Duty 4: Modern Warfare, although it has slightly lower rate of fire in this installment. It is unlocked at Level 4 (Private First Class) and has Grip, Red Dot Sight, Silencer, ACOG Scope, FMJ, Holographic Sight, Heartbeat Sensor, Thermal Scope and Extended Mags attachments available. A notable difference, like with most firearms in the game, is that the ACOG no longer sways. A rail has also been added which is not seen in Call of Duty 4: Modern Warfare. The RPD benefits greatly from the Bling perk, which allows players some flexibility in their attachment choices. Bling is useful for all LMGs due to their large ammo capacity and magazines, making Sleight of Hand and Scavenger redundant, and the RPD is no exception to this. ACOG and Thermal Scope have their obvious benefits, allowing players to perform an 'Over watch' role and provide longer-range fire support in most situations. Due to the incredibly clear iron sights, an interesting choice is the Heartbeat Sensor which allows the player a fairly clear view of the sensor even while aiming down the sights.

Stopping Power and FMJ are advised for a player going for a loud and all out attack class with a similarly powerful secondary weapon. Attaching FMJ with the RPD can yield multi-kills as increasing the penetration can also increase the penetration through enemy players, though it does not increase the base damage. Unsilenced with Stopping Power, the RPD delivers two-hit kills anywhere to the body, unless shooting through a surface or against an opponent with Painkiller. The gun can be a surprisingly good stealth LMG with a Silencer, especially in Hardcore where it can deliver one-shot kills at any distance without Stopping Power, while carrying 100 rounds of ammunition; this makes it very difficult for the player to run out of ammunition before the player dies, or the game ends. However, the effectiveness of a Silencer in Hardcore is limited, due to the lack of radar. The RPD also has very high bullet penetration, just like the AK-47 in this game; this makes it much easier for the RPD to get penetration kills quickly due to the high damage even without Stopping Power. An experienced player can unlock Extended Mags in a few days, or even a few hours of consistent use. Using Extended Magazines with One Man Army Pro can be very effective, as it allows for 18 seconds of continuous firing, followed by a 3 second class swap, which is very useful when suppression is needed.

The RPD has the 2nd highest damage output per second due to the high capacity magazines, but falls short to the L86 LSW due to the lower rate of fire. The RPD's one major disadvantage is its reload time. It takes approximately 10 seconds to reload the RPD, the same reload time as the MG4. In this time, the player could fire off almost 2 magazines with the AUG HBAR.

To compensate for it's the slow reload, there are a few options available. Sleight of Hand is a great option to counteract the slow reload, not only due to speeding up the reload but also halving the sighting time with the Pro version. One Man Army Pro is actually faster than reloading the RPD while replenishing both ammo and equipment. The Extended Mags attachment places all of the ammunition into a single drum, and makes One Man Army or Scavenger needed if the player wishes to reload (One Man Army is faster, making Scavenger less useful), however usually not necessary. When using Extended Mags, do not use Sleight of Hand. The player should instead consider using One Man Army, Bling or Marathon for the long run. A Grip is an optional attachment that also works well with an optic and Bling (for example, Red Dot Sight w/ Grip).

Reloading the RPD
Add a photo to this gallery

Medium-slow, but relatively fast for an LMG

The RPD appears in the Nintendo DS version of Black Ops, first spotted in the game's launch trailer. It can be seen with its original iron sights. It has a 100 rounds magazine, decent rate of fire and relatively fast reload time, however suffers from poor damage, (Stopping Power is recommended), though the almost non-existent recoil helps placing all shots on target. It is pre-unlocked for the enemy faction in multiplayer and 150 kills with it will unlock the PPSh-41. It is also possible to find the RPD in Zombie mode, in the Mystery Box. It can be found very frequently in the campaign and is extremely useful overall. It retains its original look from Modern Warfare 2 despite the fact that no attachments can be used.Overall, compared to the other LMGs, the M60 and XM22, the RPD has lower damage and slow reload, that are however compensed by much clearer ironsights and minimum recoil, which is almost the opposite, as the M60 and XM22 have both high recoil but high damage. 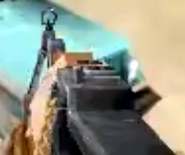 Retrieved from "https://callofduty.fandom.com/wiki/RPD?oldid=1207724"
Community content is available under CC-BY-SA unless otherwise noted.