For the gun on which the weapon is based, see Ripper (submachine gun).

The RPR Evo (originally known as the Ripper in pre-release, and still referred to as such in the game files) is a bullpup submachine gun featured in Call of Duty: Infinite Warfare. It uses the same features as the Ripper, which is the ability to transform the gun from a moderate fire-rate submachine gun to a slow fire-rate high damage assault rifle.

When all side missions are completed, the RPR Evo unlocks the Burst-Fire upgrade, which switches the weapon's primary mode to burst-fire, increasing the range and damage.

The RPR Evo is unlocked at level 16, and is the fourth submachine gun unlocked.

Whilst in SMG mode, the RPR Evo features a fast fire rate and tight hipfire spread, but suffers in the damage and accuracy departments. The SMG mode of the RPR Evo is properly utilized in close quarters situations as a result. The downfalls of the SMG mode can be recuperated with the Foregrip, Extended Mag and Rifled Barrel attachments, to solve the problems with accuracy, bullet expense rate and damage over range. The Laser Sight can be used to enhance the RPR Evo's hipfire capabilities.

Whilst in AR mode, the RPR Evo sports a high accuracy and high damage per shot, but suffers in fire rate and hipfire spread. The AR mode of the RPR Evo is properly utilized in ranged combat situations as a result. The AR mode can be supplemented with ranged attachments such as the Thermal or VMC attachments, for holding down long sight lines with a higher zoom sight.

Scavenger is a valuable perk for the RPR Evo, as the high expense of bullets from the SMG mode will render players dry with constant use. Dexterity is also a useful perk, shedding reload times in half.

The RPR Evo in SMG mode.

Aiming down the RPR Evo's integrated Hybrid Sight while in SMG mode.

The RPR Evo in AR mode.

Aiming down the RPR Evo's integrated Hybrid Sight while in AR mode. 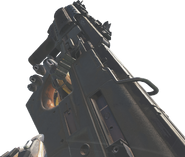 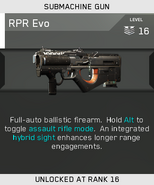 The RPR Evo being unlocked in multiplayer. 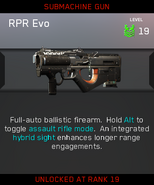 The RPR Evo being unlocked in Zombies.