Corvus with the release of Nova 6

Rachel Kane was an agent of the Central Intelligence Agency and a character in Call of Duty: Black Ops III. An agent of the Central Intelligence Agency, Kane acted as the Liaison Non-commissioned Officer for Jacob Hendricks and John Taylor during their hunt for the defector Dylan Stone. During the mission, Kane and Taylor developed a relationship, which did not last long through Taylor's voluntary acceptance of Project Prometheus.

Kane was first introduced to John Taylor and Jacob Hendricks during an operation in the quarantine zone of Singapore to investigate a CIA black station that had mysteriously gone dark. Upon rendezvousing with Taylor and Hendricks, Kane saved them from a 54 Immortals Warlord before assisting them in clearing the flooded streets outside the black station.

Upon investigating the station, they found it ransacked and its staff slaughtered. Checking the local computer terminals, Kane determined that the last WA operatives to report to the station were Dylan Stone, Javier Ramirez, Alice Conrad and Joseph Fierro. She also noticed the station's data drives had been stolen, containing top secret information regarding covert CIA operations around the globe.

Upon discovering that some of the data had fallen into the hands of the 54 Immortals, Kane sent Taylor and Hendricks to retrieve it and hopefully determine the truth behind the black station killings; in the process, they inadvertently killed the 54 Immortals leader Goh Min and maimed his sister, Goh Xiulan. Upon securing the leaked intel, they discovered the truth: security footage proved that Stone's team, who had been operating in the quarantine zone, had inexplicably murdered the black station staff.

In order to find out their motives, Kane sent Taylor and Hendricks to the site of Stone's last known operation before the murders - the investigation of a priority alert signal triggered underneath the abandoned Coalescence facility at the center of the quarantine zone. Taylor and Hendricks discovered a long-abandoned CIA black project, which Kane identified as SP/CORVUS. The project, which had used involuntary human test subjects, was soon found to be directly linked to the Singapore disaster that caused the deaths of 300,000 people and lead to the creation of the quarantine zone. It became clear that Stone's team had inadvertently stumbled onto the project and had been marked for assassination by the CIA in order to cover it up, triggering their betrayal.

At the facility's server rooms, Taylor and Hendricks apprehended Ramirez, who was in the process of leaking more information to the WA's enemies. Questioning him, they discovered that Stone had bartered his way out of Singapore using the stolen data and was headed for Egypt to find Dr. Yousef Salim, a psychotherapist involved in the black project, for more answers. Ramirez was executed by Hendricks before 54i reinforcements arrived on the scene and flooded the facility in an attempt to kill Taylor and Hendricks. They managed to escape, but the information leaked by Ramirez allowed the 54i to target the safehouse where Kane was located.

Amassing an army to besiege the CIA safehouse and ravage cities outside the quarantine zone, the 54 Immortals, lead by a vengeful Goh Xiulan, managed to overwhelm the CIA's defenses and capture Kane. Using her as bait to coax Taylor and Hendricks, the two disobeyed Kane's orders to pursue Stone, instead choosing to rescue her. Taylor killed Goh Xiulan and saved Kane from certain death.

Since WA communication channels had been compromised by Stone's leaks, WA command was unable to assist Kane any further into the mission, meaning she had to take full responsibility of Taylor and Hendricks. Travelling to Egypt to locate Stone, Kane used the WA's alliance with the Egyptian Army to call in a favor - that they place Dr. Salim under custody to avoid his capture at Stone's hands.

Upon arriving at the Egyptian Army stronghold, Ramses Station, Kane was introduced to Lieutenant Zeyad Khalil, who had secured Salim as Kane had asked. In return, Kane promised to support the Egyptian Army against the invading Nile River Coalition, who arrived on the scene shortly afterwards in a surprise attack; Stone had made allies of the NRC by leaking intelligence regarding the Egyptian Army's weak points to them.

As Taylor and Hendricks fought off the NRC attack, Kane assisted them from Ramses Station, before realizing that Stone had orchestrated the NRC's assault in order to distract her from Salim. Indeed, she soon found that Salim had been kidnapped by Stone during the attack. All was not lost, however: Taylor had covertly placed a tracking device on Salim, ensuring that Stone's movements could be tracked.

Following Stone to Kebechet, Taylor and Hendricks were too late to prevent Stone from interrogating and executing Salim, but managed to capture Alice Conrad. Taylor interrogated her for information regarding Stone's location and motives. She revealed that Stone now intended to find and kidnap Sebastian Krueger, the director of SP/CORVUS, and hold him publicly accountable for his crimes. She also revealed that Stone and Fierro were using the sub-Cairo aquifers as a temporary base of operations. Taylor then executed Conrad.

Kane, Taylor and Hendricks, with the full support of the Egyptian Army, assaulted the NRC-occupied aquifers and trapped Fierro inside, but were too late to stop Stone's escape. Upon trying to reach Fierro, Taylor nearly drowned, but was saved by Kane. In a moment of sincerity, Kane and Taylor admitted to harboring romantic feelings for one another and suggested pursuing a civilian life together. Taylor then proceeded to confront Fierro alongside Hendricks, resulting in Fierro's death at Taylor's hands. Hendricks, enraged by Taylor's apparent lack of empathy for his former comrades, accused him of being used by Kane and threatened to kill her, which prompted Taylor to assault Hendricks and criticize his lack of focus during the mission.

After Fierro's death, Hendricks filed a report on Taylor, critical of his unprofessional relationship with Kane. Meanwhile, Stone's location was finally determined; he was under heavy NRC protection at the Lotus Towers in Cairo. Kane hatched a plan to assist Lt. Khalil in inspiring a civilian uprising, which would keep the NRC forces occupied while Taylor and Hendricks moved in to eliminate Stone. It worked, but Khalil was captured in the ensuing battle and Taylor was crippled by Stone. Stone was killed at the last second by Hendricks, who saved his injured friend.

With Stone dead, the operation was a success. Without Stone's evidence, the CDP's accusations that the CIA was implicated in the Singapore disaster were brushed off as a propaganda exercise.

Taylor, unable to continue his career as a Black Ops soldier in his injured state, was offered a chance to continue serving the WA in the form of Project Prometheus. This meant receiving cybernetic augmentations, a Direct Neural Interface, and being sent on high-risk missions against dangerous odds. Kane, who had previously intended to leave the CIA with Taylor to start a new life, found herself unable to accept Taylor's choice and broke off her relationship with him and returned to the CIA. Taylor, however, kept her scarf around his arm as a memento of their relationship and could be seen wearing it with him to Ethiopia.

"You never left me behind, I'm not leaving you."
— Kane, to Taylor

A year later, in 2065, Taylor succumbed to a strange DNI "virus" caused by a failed interface. An A.I. program known as Corvus had gained control of Taylor's DNI and manipulated him into searching an immersion of his own memories in order to find answers regarding Corvus' inception, while being hunted by the Player. Kane eventually diagnosed the problem, and was able to explain to how Corvus worked.

The resultant immersion experience caused Taylor's team (Diaz, Hall and Maretti) to die as a result of the D.N.I. Infection after the Player died of surgical complications in reality; Taylor, however, managed to resist Corvus' control and regain control of his mind, before being "killed" in the immersion - his consciousness survived in Corvus' "Frozen Forest" through a glitch. Meanwhile, Hendricks, angered by the technology that had driven his best friend seemingly insane and hell-bent on finishing Stone's mission, launched a terrorist attack on the Coalescence headquarters in Zürich, capturing Sebastian Krueger.

Upon reaching the Coalescence headquarters in Zürich, Kane and a Player-controlled Taylor attempted to stop a Corvus-controlled Hendricks and contain Corvus. Discovering Nova 6 research deep within the facility, Kane detected a containment leak and attempted to stabilize the containment facility using a computer terminal from the inside. However, it turned out that computer systems were under Corvus' control, and it had tricked Kane into entering the Nova 6 storage room in order to kill her, releasing the gas instantly whilst the Player watched from the other side, powerless to help her. In her final words, Kane warned the Player that Corvus can manipulate people into believing things that are not true.

"Rachel Kane never had a DNI. She's gone. But you... you can still make it here! You can live forever!"
— Sarah Hall

In the "Frozen Forest", Corvus exploited Taylor's love for Kane by telling him that since she never had a DNI, her consciousness would be lost forever, and that Taylor could avoid the same happening to himself by staying in the Frozen Forest. Taylor and the Player worked together to resist Corvus' manipulation, and this eventually culminated in the Player purging their DNI of the rogue A.I. and potentially wiping all memories of Kane in the process.

"Ever heard of Nova 6? It's a chemical agent that came dangerously close to being used in World War II, and the Cold War."
— Kane to the Player after having found Nova 6 in Life.

"Whatever this thing says... no matter what it does... You cannot trust it!"
— Kane's final words before being gassed to death by Corvus.

Kane after killing a warlord with a Locus, in "In Darkness".

Kane after being exposed to Nova 6 ("Life"). 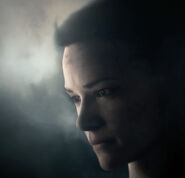 Kane in the Vengeance intro cutscene.