"3-round burst ballistic firearm. Accurate at longer ranges but can be fired quickly at the expense of accuracy. Comes with a built in EMP launcher that detonates on impact."
— In-game description

The Raijin-EMX is a three-round burst bullpup submachine gun added to Call of Duty: Infinite Warfare as part of the August 23rd, 2017 update, alongside the Atlas LMG. It features a unique integrated underbarrel Tactical EMP Launcher that fires a miniature EMP shot that explodes on impact. It has a high fire rate within the burst, but the burst delay of 200ms means that its rate of fire per minute is slower than average for SMGs, although the Raijin still shoots considerably fast.

The Raijin-EMX can be obtained from the Magic Wheel on all of the maps. The underbarrel EMP is of little use in Zombie mode, but it can decapitate a zombie's legs to create a crawler.

The Raijin-EMX in first person 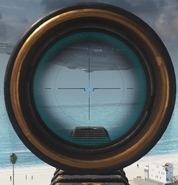 Aiming down the scope of the Synergy variant

Using the EMP launcher
Add a photo to this gallery
Retrieved from "https://callofduty.fandom.com/wiki/Raijin-EMX?oldid=2449733"
Community content is available under CC-BY-SA unless otherwise noted.