Factory and residential buildings with debris and a lot of cover

The map consists of several multi-story buildings overlooking a central space that is broken up by railroad cars. Also, there is a warehouse and a smaller open space next to the warehouse. Mounted machine guns can be found, but can also be flanked. It is inadvisable to venture into the railyard itself, as one can quickly become easy prey for any elevated snipers.

Aside from various aesthetic improvements, there are a few differences between the first Call of Duty and the Call of Duty 2 versions.

Overview of the railyard.

Overview from another perspective.

Railyard in Call of Duty 2. 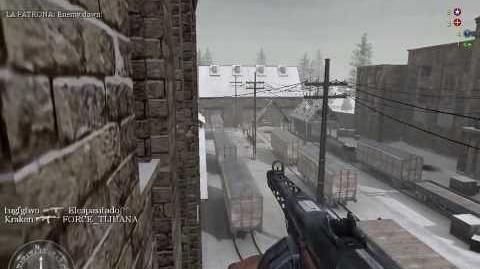