The Rampart 17 is an assault rifle featured in Call of Duty: Black Ops 4. It has a MKII variant available from Reserve Crates.

The Rampart 17 is a high damage assault rifle, killing in four to five shots. It has a low fire rate at 517 RPM, the slowest in the assault rifle category. It has moderately-high recoil, kicking upward and then from right to left. Due to these characteristics, the Rampart 17 is best suited to medium-range combat where its higher damage will give it an advantage over other guns. While it can be effective at close or long range as well, its lower fire rate hampers close range ability and the moderately-high recoil will prevent effective long range use of the rifle (unless the player fires in single-shots or bursts to control for recoil).

Attachments for the Rampart 17 include High Caliber I and II, FMJ I and II, Fast Mags, Long Barrel, and Grip. High Caliber will give the weapon higher damage to the head and chest for High Caliber I and II, respectively. This allows a player to be able to maximize on the damage potential of the Rampart 17 by reducing the number of hits needed to kill from four to three. FMJ I and II also serve a similar purpose in maximizing the weapon's damage potential, albeit through different means; with FMJ equipped, a player will be able to more adequately shoot through cover as well as negate and destroy Armor. The second level of the attachment, on top of the previously mentioned effects, will maximize penetration, and increase damage to vehicles and equipment. Given the Rampart 17's higher damage figures in comparison to the rest of its class, it may make sense to elect both levels of either the High Caliber or FMJ attachments.

The Rampart 17 appears in the zombie maps Voyage of Despair, IX, Blood of the Dead, Classified, Dead of the Night, Ancient Evil, and Alpha Omega, where it's available as a weapon within the Mystery Box for 950 points. When upgraded via Pack-a-Punch Machine, it becomes the Parapetrifier with the magazine size increased to 40 rounds and its ammo reserve increased to 440.

Rampart 17 in the first person view. 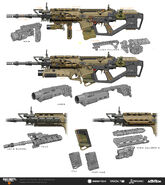