"Ever wonder who’s on the other side of the KillCam? Meet Randall Higgins, the KillCameraman. With all of the mayhem-inducing content loaded into Havoc, the first DLC pack for Call of Duty: Advanced Warfare, Randall’s going to have to elevate his game to keep up."
— Description

Randall Higgins: You know every time you get fragged in Call of Duty, you see a killcam, right? You ever stop to think, "Who's the guy holding that camera?" That'd be me. I'm the KillCameraman. That's my job, what's your dumbass job? Been doing it for a long time. Saw World War II, Vietnam, the future, you name it, I've filmed it. Then, Advanced Warfare is having DLC shows up right at my party, with four crazy new maps, like a desert fusion reactor and a motel filled with creepy-ass clowns, an insane new weapon, and zombies in freaking exosuits?! Let me tell you something. I've seen some shit, but I ain't never seen shit like this.

Shifts to him in a game on Sideshow

Randall: They've got this directed energy weapon called the "Widowmaker". It's not called the "Friendmaker" for a reason. You don't want to be on the killcam, then don't get yourself killed.

Shifts to him in a tree on Drift

Randall: Yeah yeah yeah yeah! AVALANCHE!!! You got hit by an avalanche dude! (laughs) I like to think of myself as an educator. Take that guy for example; he just learned a very valuable lesson about how not to be a complete dumbass. (The person was crushed by an Orbital Care Package)

Shifts once more to him in an elevator, where he's smearing zombie guts on himself)

Shifts to him in a trailer

Randall: They're already dead, so why do we need to give them more power than the undead by suiting them up in exo suits? Who's the guy who thought of that? Some asshole!

Shifts to him back on Sideshow, using the toilet. An explosion goes off outside.

Randall: Oh, come on! (Throws a magazine on the floor and takes out a computer.) Can't a guy get a break for five minutes!? That is it. That is it. (He uses a drone via the computer.)

He is shown walking onto a battlefield

The rest of the video advertises the DLC content, including its four multiplayer maps, exo zombies, and the AE4 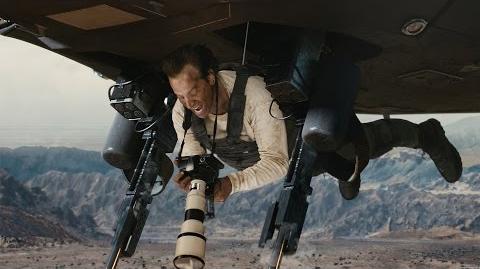