Random Perk Bottle, also known simply as Random Perk, is a Power-Up featured in the Zombies maps Ascension, Call of the Dead, Shangri-La, Moon, Die Rise, Buried, Shadows of Evil, The Giant, Der Eisendrache, Gorod Krovi, Revelations, Blood of the Dead, Classified, Alpha Omega, and Tag der Toten, as well as the gamemodes Zombies Onslaught and Outbreak. It initially appears as a glowing bottle similar to a Perk-a-Cola or Molotov Cocktail. The Random Perk Bottle power-up gives all living players a random perk that appears on the map for free and can be used to exceed the four perk limit.

During Space Monkey rounds in Ascension, monkeys will attempt to destroy the Perk-a-Cola Machines. If all of the monkeys are killed without touching a perk machine, the player will be awarded with a Perk Bottle along with Max Ammo.

In Call of the Dead, the Bottle, alongside a Death Machine or Wunderwaffe DG-2 (depending on if the player has completed Original Characters Trapped), appears if George A. Romero is neutralized with any weapon excluding the Pack-A-Punched V-R11.

In Die Rise, the Random Perk Bottle can be obtained by killing all the Jumping Jacks on their given round with 100% accuracy. This is most commonly done with melee attacks by using the Bowie Knife or Galvaknuckles, though equipment like Claymores and the Trample Steam also contribute. If successful, the last Jumping Jack will drop the power-up alongside a Max Ammo, similar to Space Monkeys.

In Buried, the Random Perk Bottle is obtained by traveling through the haunted mansion and having various Mistresses spawn. They will replace any zombie that is still alive, almost like the round is at a pause. After all the Mistresses that replaced the zombies are killed, the other players must fend from more attacking them until the player in the mansion has left. This can only be done once every 5 rounds. If the player goes back in the mansion at 4 or less, he will only be attacked and the round is still going.

In The Giant, a Random Perk Bottle can drop after linking the teleporter or using it. In addition to perks already on the map, it can also give Deadshot Daiquiri and Stamin-Up (whose machine can become available through an easter egg).

In Call of Duty: Black Ops Cold War, the Random Perk Bottle appears simply as "Random Perk", now taking on the form of a soda can rather than a bottle. During Zombies Onslaught, the last Special/Elite enemy killed during a surge will drop a Random Perk, while in Outbreak, it can be obtained by eliminating a Horde Patrol that can sometimes appear somewhere on the maps. 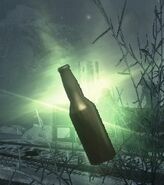 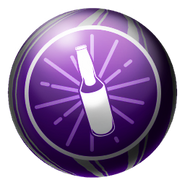 On the House, the GobbleGum that gives the player the Random Perk Bottle in "Black Ops III Zombies"