Call of Duty Wiki
Register
Don't have an account?
Sign In
Advertisement
in: Call of Duty: Modern Warfare 2 Miscellaneous Characters

Raptor is first seen unconscious after his helicopter was shot down. The insignia on the nose of the crashed helicopter that Raptor was presumably being transported in appears to be the shoulder sleeve insignia of the 23rd Infantry Division of the United States Army. His attire includes a suit and tie. Although never identified as such in-game, it is assumed he is a high-level US government official. At one point of the mission, the player has to defend Sgt. Foley as he carries Raptor to a meat locker for protection, which is then locked and made inaccessible for the rest of the level. 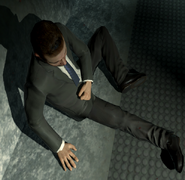